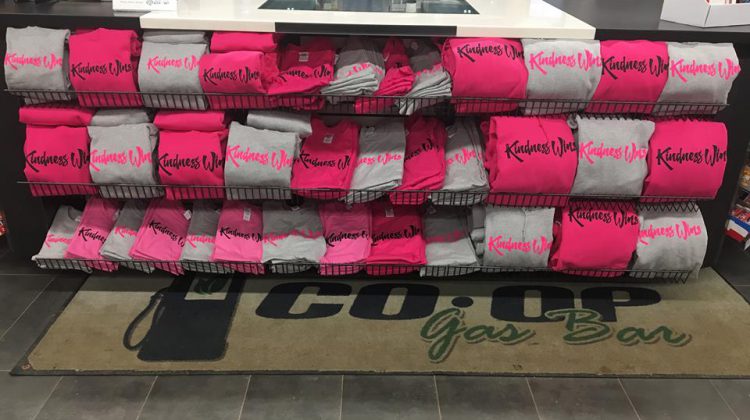 The Lloydminster & District Co-op is gearing up to present their 9th annual Kindness Wins campaign. The campaign reminds people to be kind to each other, in an effort to stop bullying. It’s modeled after Pink Shirt Day, which encourages people to stand together against bullying by wearing the colour pink on Wednesday, February 27.

Pink Shirt Day happens across Canada on the last Wednesday of February. It serves as a public demonstration against bullying in schools. In a similar way, Kindness Wins reminds people to do the opposite of bullying by being kind. Kristine Knourek, Marketing and Communications Manager with Lloyd Co-op, says the movement’s progress is something the Co-op is very proud of.

“Our staff and Co-op membership look forward to the return of Kindness Wins each year. Witnessing the impact it’s made on our youth, in our schools and businesses, and across our communities has been humbling. The campaign is not just about wearing a pink shirt on a particular day. It’s about acts of kindness, love and respect we can share all year long,” says Knourek.

This year marks the ninth consecutive year Lloyd Co-op has promoted the movement. They partner officially with community members such as the Lloydminster Youth Council, the mayor, city councillors and the Lloydminster Junior A Bobcats. Thus far, almost $25,000 has been raised through the sale of the campaign’s pink and grey Kindness Wins-branded merchandise.

Over the years proceeds have been donated to Beyond Borders Circle of Change, Lloydminster Community Youth Centre and Big Brothers and Big Sisters of Lloydminster. Kindness Wins t-shirts will be sold for $10 and hoodies for $20 this month at select Lloyd Co-op locations. One dollar from every t-shirt sold and two dollars from every hoodie sold will be donated.

Proceeds from merchandise sales will be donated to Beyond Borders Circle of Change to promote anti-bullying work in the community. Lloyd Co-op invited you to stand with them against bullying this Pink Shirt Day on Wednesday, February 27.