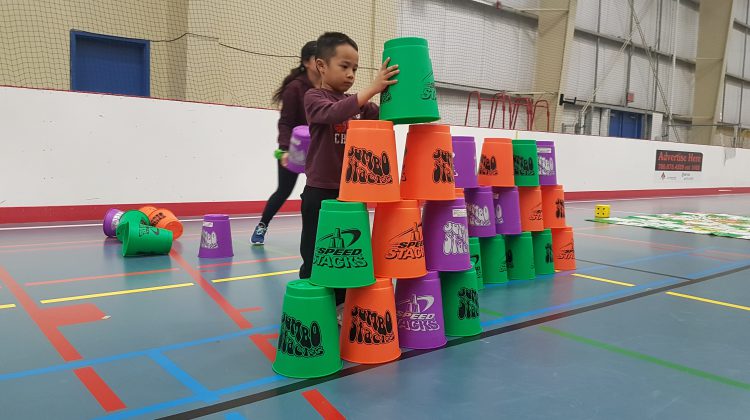 A child stacking buckets in each other at an event for Autism Awareness Month. Photo: Brendan Collinge/106.1 The Goat

Members of the community came together this weekend for an afternoon of inclusive fun. April is Autism Awareness Month and an annual playtime event brings together the community to promote autism acceptance.

The Servus Sports Centre had a fieldhouse full of games, activities and fun environments. The public, those living with autism and their families were encouraged to come and enjoy themselves in a welcoming environment. Bouncy castles, balloons, sensory objects and other ways to have fun were available for autistic and neurotypical youth to enjoy themselves with.

The event highlights a space where kids and families living with ASD can enjoy being themselves in an area that’s free of judgement. Families of those living with autism also got to connect with each other. One mother at the event, Yvonne Jesmer, believes the event is a helpful way to get her 12-year-old son out in the community.

“When you see an event like this, this is something positive for the kids. This actually gets out kids out,” says Jesmer.

She says many kids and families with autism have a hard time going out due to anxiety. Outside of an autism social group her son takes part in, there’s not much they get out for. Spaces like this allow for a safe environment for kids like her son to feel comfortable being themselves in.

“When you see the kids actually enjoying themselves, it’s because when they walk in they know this is an autism-friendly environment. So they’re aware coming in that this is somewhere they’re safe, everyone is the same here, and nobody is judging them.”

The event helps youth feel comfortable in a world that often misunderstands them. It also has familiar faces such as the support workers they see and other kids like them. Jesmer’s family has been back in Lloydminster for about three years now after having lived in Winnipeg. There’s less autism programming here compared to Manitoba’s capital, but Jesmer says events like these help her son greatly.

“It’s different, it is, but they’re getting better. And things like this; this is important.”

Melissa Latos is an occupational therapist with the SHA who work with lots of kids with autism. She helped organize the event and is happy to see the community come out to support it. On top of helping youth living with autism feel welcome, Latos says it also helps them work on skills.

“Being in a space like this and interacting with a bunch of other kids just helps with their social interaction, and their communication, motor skills and all of that stuff. It’s working on all those skills, and also provides a nice leisure afternoon for them,” says Latos. She adds that she’s happy to see the community come out and support kids with ASD.