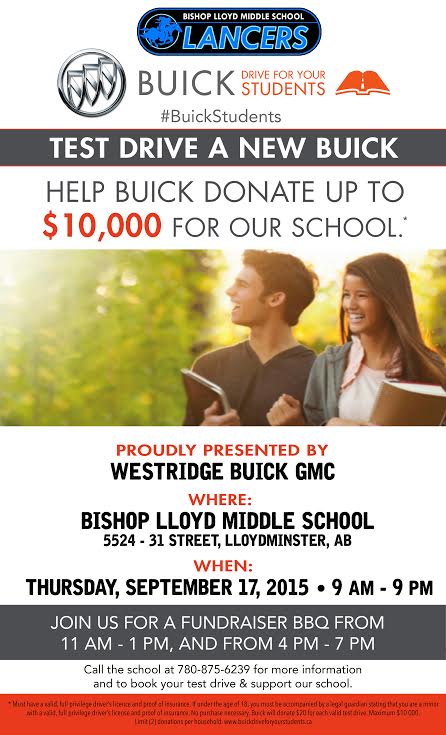 Bishop Lloyd Middle School is inviting everyone to test drive a Buick.

The school is hosting a fundraiser on Thursday, September 17, where visitors to the school can test drive a car with no obligation, and Westridge Buick GMC will donate$20 to the school for each driver. The dealership has pledged a maximum of $10,000.

Principal Shawn Larson says the money will be put toward supporting the school’s breakfast program, and school beautification.

“The students identified last year that we wanted to improve our school grounds, and have benches and trees, and make it a lot more welcoming, and just get a lot more beautiful,” Larson said. “We’re working with our students to develop a plan, and the first part of the plan is raising some money to support what’s happening out there.”

Larson also says that the school spends around $15,000 on their breakfast program per year, raised from independent fundraisers.

Jason Mills, general manager of Westridge Buick GMC says he approached the school with the idea.

“[The dealership was] at a conference, and we were talking about all the different fundraisers that General Motors has to offer, and this is one of them,” Mills said. “I went to this school, for four years back when I was a kid in Lloydminster… and I thought this would be an exciting opportunity for these guys to get a chance to do some things. I was familiar with some of the beautification programs that they were working on, and I thought it would be a great shot in the arm for them to get that kind of money. Any time you can raise $10,000 in one day, that’s a huge amount of money and I know that that can go pretty far with what they’re trying to do. So it just was kind of a natural fit.”

Mills also says that the record for similar fundraisers was 508 drivers in a single day, set at a school in Ontario, and he hopes to be able to beat that total.