Vermilion producers weigh in on Bill 6 repeal and replacement 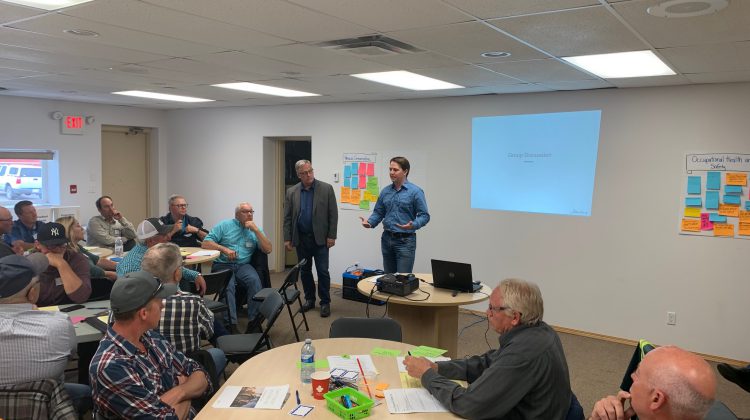 The thirteenth provincial public consultation touched down in Vermilion as the UCP government plans to repeal and replace Bill 6.

Minister of Agriculture and Forestry of Alberta Devin Dreeshan and Vermilion-Wainwright-Lloydminster MLA Garth Rowswell spoke with local farmers on what needs to be changed to the current legislation focusing on the safety of farm and ranch workers.

Rowswell says one of the many themes discussed during the consultations is farmers having more options when it comes to insurance, just one concept that the government plans on implementing within the new bill. Topics also consistently brought up include workers compensation and Occupational Health and Safety

“If something happens and you get in trouble with Occupational Health and Safety it could be quite an onerous thing, that’s been some of the conversation there and Labours relations. I listened in to some of the tables and it is quite interesting how important people feel that they want to do the right thing by their employees.”

The UCP government plans to repeal The Enhancement of Protection of Farm and Ranch Workers Act, brought in as Bill 6 by the former NDP government, and replace it with the Farm Freedom and Safety Act. Minister Dreeshan says the consultations with farmers have been very positive.

“We have a great team from the agriculture and forestry staff that have been taking notes, and our hope is to have the summary done as soon as the end of August, once the consultations are over and then to have a piece of legislation that is introduced this year and hopefully passed.”

Rowswell says the provincial government plans are to make the act more manageable and relatable for the agriculture sector.

“The good thing about Bill 6 being introduced is that it woke everyone up and they said ‘well, jeez we need to have input into this kind of stuff’ and they sure appreciate this.”

The biggest complaint heard amongst the thirteen consultations so far is that farmers feel they can’t actually be in compliance with Bill 6, according to Minister Dreeshan.

“There’s a misconception, I think, that gets promoted a lot, that farmers somehow have unsafe working environments or want their daughters or sons, or nephews, or cousins, or farmer workers they’ve had for years in an unsafe situation. That’s the farthest from the truth.”

“Another recurring theme is the education component, that in agriculture we have a great story to tell, whether it’s using fewer inputs on farms to produce more where in Canada we’re the fifth country in the world that produces more than it consumes, so we export a tremendous amount,”  Dreeshan wants to make sure that farmers get recognized for the work they do to keep their workers safe.

As the consultation process continues through the month, the provincial government has set up an online survey as an additional way to receive feedback until August 31.