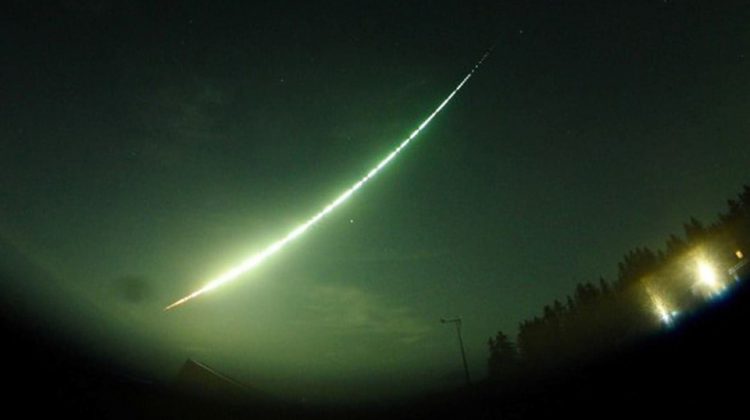 Researchers are using information collected from a camera in Vermilion to find where a fireball seen on August 31 could land.

A photo of a fireball meteor was captured by a specially designed camera at the Lakeland College Research Centre in Vermilion. The all-sky camera caught the fireball travelling through central Alberta at 10:23 p.m. on August 31.

Rob Baron, an instructor at Lakeland College and amateur astrophotographer, says researchers are currently looking at the data from the cameras to find where the fireball could land.

“The researchers in Australia along with those in Alberta are gathering the data and working on [where the fireball landed]. It won’t be too long before they narrow down their search field,” Baron says.

The camera was set up at Lakeland College in October 2018 in partnership with the University of Alberta and Curtin University in Australia. It is part of a “fireball network” which automatically detects and records fireballs.

The network of cameras connects to supercomputers in Australia which analyzes and predicts where a meteor will fall. It can also be used to find where the fireball originated from in the solar system.

Baron says the fireball was one of the more significant phenomena this year.

“Fireballs are rare. Meteors are common, you could stand out at night and see a shooting star but most of those particles burn up in the atmosphere and never reach the ground. So it takes a large mass of rock to actually make it to the ground,” Baron says.

Baron says the fireball is similar to one that landed near Lloydminster in the past. In 2008, a total of 41 kilograms of fireball Buzzard Coulee were found in the regional municipality of Wilton.

“Through the use of cameras, researchers from the University of Calgary and Edmonton were able to very successfully narrow down the debris pattern and they recovered hundreds of meteorites from that fall area,” says Baron.

“Fireball network” cameras have been installed at the Lake Louise Ski Resort, Athabasca University and more recently one was installed in Granum in late July.

The cameras need to be put in parts of the country with darker skies and have a good internet connection in order to capture and send information reliably to a larger Western Canada network.