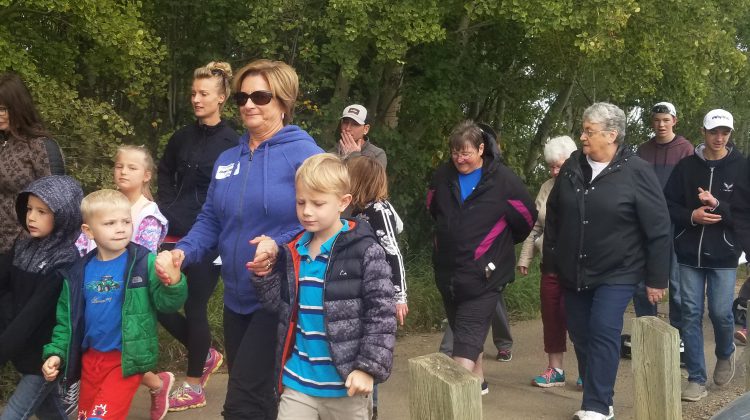 One hundred and eighty people walked through Bud Miller Park for the Flexxaire Step 'n Stride in support of those with Parkinson's disease. (106.1 The Goat/Nikita Ganovicheff)

Residents of Lloydminster joined communities across the province to walk and raise money for Parkinson’s. The 7th annual Flexxaire Step ‘n Stride is the Parkinson Association of Alberta’s biggest fundraiser at covers over half of their fundraising revenue.

One hundred and eighty people met at Bud Miller Park on September 7 to raise awareness of those living with the disease. Volunteer and runner Samantha Brown took part in the event in support of her grandmother, who is living with Parkinson’s.

“It’s our way of showing our grandma and her whole family that we are behind and we support her and to raise money for a good cause,” Brown says.

Brown and her family, from Paradise Valley, started taking part in the event in 2015, a few months after her grandmother’s diagnosis.

“By 2032, the population globally is expected to hit peak ageing so the number of people with Parkinson’s is expected to double. We’re seeing an increase in support and services that are required from people across the province.”

Lloydminster was short of its goal of $26,000 and raised $23,390 at this year’s walk. Client Services Coordinator Sherry Bower-Gagne says the money raised in the walk will stay in Lloydminster and surrounding areas and will go towards one on one support services, professional counselling, education and research.

Bower-Gagne says the walk helps people with early-onset Parkinson’s as getting out and being active helps reduce the symptoms of the disease. The main symptoms are tremors, slow movement, stiffness of the muscles and difficulty walking or balancing.

Nine locations across Alberta took part in the Flexxaire Step ‘n Stride and raised a total of $415,000 in the province.