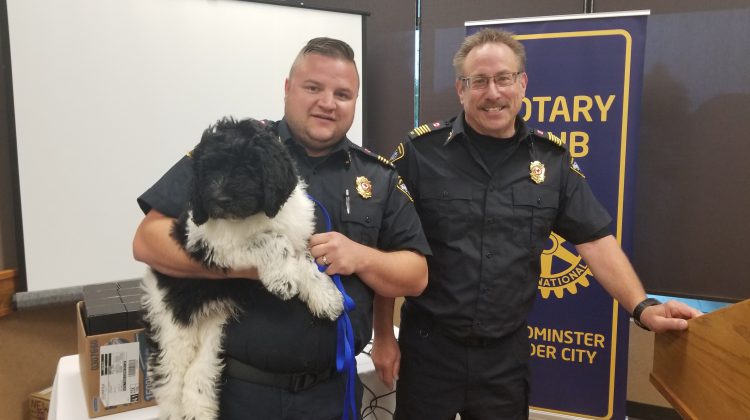 The Lloydminster Rescue Squad is welcoming a new member to their team.

George is a 10-week-old Newfoundland-Poodle mix from Saskatoon and will be a therapy dog for the squad. Therapy dogs are trained to provide comfort to people and help reduce stress.

“We feel that in the community it just helps people calm their nerves when they’re in a negative time of their life. Whether it be in the hospital or somebody’s been involved with sexual violence, we feel like this dog will help with the mental health of those in the community.”

The Rotary Club of Lloydminster provided $7,000 to the squad which will go towards housing and training the dog. President Evan Stephens says George “will do wonders for the kids in the community.”

“As a club, we like to give back to the community. We focus on youth and events and we see a great need in our community for this type of animal to help the youth and calm them down.”

Lloydminster Rescue Squad Chief Norm Namur says the dog is hypoallergenic and doesn’t shed much which was an important factor in choosing which breed of dog to adopt.

“If you’re bringing him to the hospitals or the senior citizens home, when you pick him up and pet him there’s not this dander flying around and at the home, he’s not going to be shedding,” Namur says. “Being hypoallergenic that’s going to be so important, especially when we visit the hospitals for people and school kids who have allergies, it will be very minimal.”

The Rescue Squad will also be partnering with Lloydminster Sexual Assault Centre to provide handlers for the therapy dog. There will be five handlers as Deputy Chief Leblanc expects many calls requesting George’s service.

George will be taking therapy dog training over the coming weeks.

“There’s a lot of training ahead, a lot of work ahead but I think at the end of the day, it will be something the community will be receptive to,” Namur says.

Once he is done his training, people can contact the Rescue Squad or the Sexual Assault Centre to request him to show up at their business or event.