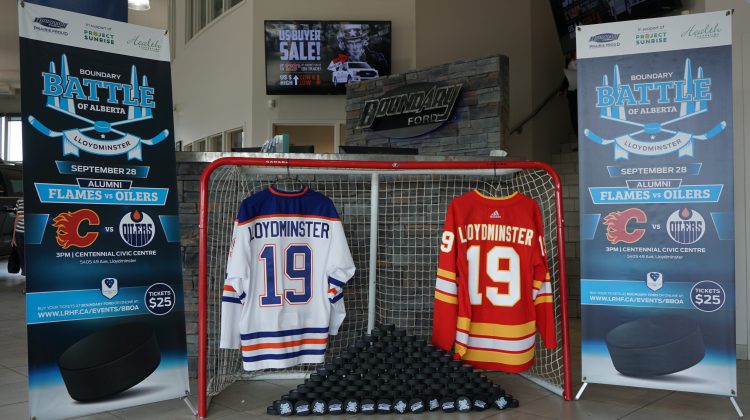 The Boundary Battle of Alberta is set to see Oilers and Flames alumni face-off in support of the Lloydminster Region Health Foundation. (Photo by Brendan Collinge, MyLloydminsterNow.com staff)

Residents still have the opportunity to watch NHL Alumni battle it out in support of mental health Lloydminster. Tickets for the Boundary Battle of Alberta is still available with all proceeds benefitting the Lloydminster Region Health Foundation.

A couple of hours after the first game sold out, it was announced that a second game will be taking place at the Civic Centre. Around $40,000 was raised in support of LRHF’s mental health initiative, Project Sunrise, through the sell-out event. Total event proceeds will exceed $100,000 if the second game sells out.

The ticket sales will benefit a new program through the initiative which aims to work with athletes and those surrounding them including coaches and parents to raise awareness on mental health. The program will inform those involved in sports programs with issues such as substance abuse, building personal skills for mental wellbeing and stress management.

16 Calgary Flames and Edmonton Oilers alumni will in the Border City the weekend of September 28th. Community activities are planned at the Servus Sports Centre the morning of the game, and the players will be at the Lloydminster Bobcats’ banquet.

The first game will be kicking off at noon at the Civic Centre. Tickets are available for $25 on the LRHF website.