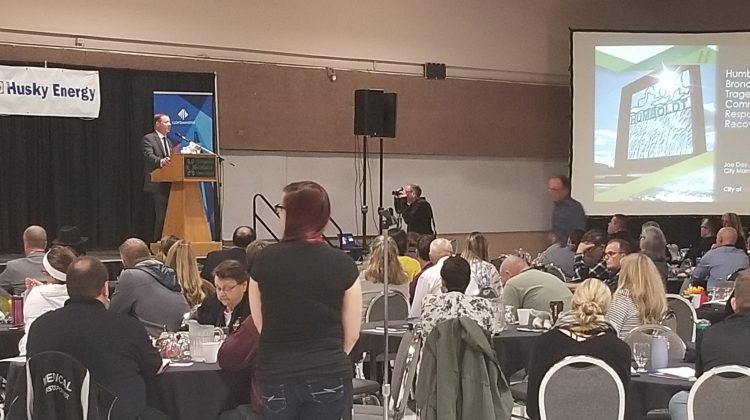 Joe Day talks about the city of Humboldt role and response to the 2018 Broncos bus crash. - 106.1 The Goat/Nikita Ganovicheff

Humboldt city manager Joe Day was one of the keynote speakers and talked about the city’s role in establishing a crisis centre, helping the community and getting information out to the public.

“Something will happen in the future somewhere and I’m hoping some of the lessons we learned in Humboldt I can share and those coming to the conference like this can learn from it. And if there isn’t anything from my presentation that they can use, the people that meet at this conference can meet with their peers and discuss similar issues and learn something along the way.”

Day says the city received overwhelming support after the crash but found there was a balancing act when moving on from the incident.

“With that comes a bit of a delicacy with how to balance it out because there are people in your community that after a few weeks or months are saying ‘let’s move on’ whereas others in the community are legitimately still grieving. You have to find that balance to know how to address each one.”

Another key point for Day was building a network of peers in the same field who can he could call for support during an emergency situation.

The conference featured breakout sessions focused on communication during a disaster, economic recovery and disaster resilience for communities.

Lloydminster Fire Chief Jordan Newton says the conference gives them an opportunity to learn and prepare for future emergency situations from other community leaders.

“The networking opportunities between all the industry professionals to learn off each other and talk about industry best practices to ultimately build up our programs better in our communities, industries and institutions to hopefully better effectively respond, mitigate and recover incidents if they were to occur.”

Newton says there is an underlying theme in the conference of the mental health in large scale traumas.

“We’re beginning to realize the recovery aspects of emergency management is just as important as the mitigating efforts. Effectively being able to recover from incidents, whether it be re-introducing people to homes or the mental health aspects, it’s tremendously important.”

Newton was one of the speakers in the first year of the event which had a small regional focus but says the conference has grown and attracted many from both sides of the border.

“We have over 200 people here today. We have a great lineup of speakers and it’s really become a provincial type conference for both Alberta and Saskatchewan. I’m glad to see it grow and I hope to continue to see it grow in the coming years.”