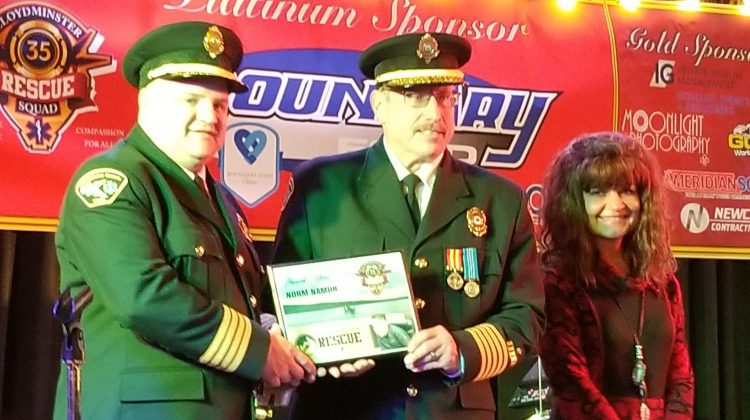 Deputy Chief Ryan Leblanc presents a certificate to Chief Norm Namur at the 2019 Sirens and Sapphires Gala. -106.1 The Goat/Nikita Ganovicheff

For the second year in a row, the Lloydminster Rescue Squad broke six figures in support through their fundraising gala.

The fifth annual Sirens and Sapphires Gala is the main fundraiser for the squad and raised $100,000 through ticket sales, auction sales and donations. The proceeds will go back into the squad and pay for the operating costs as well as pay off a command truck.

Chief Norm Namur says the squad is relatively complete in needed equipment but they will need to eventually replace older equipment.

“Every year we decide what we get this year; not only new tools but there are some new innovations out there that would make our job easier too. We’re always looking at what’s the next needed thing or the next best thing that can aid in our extracations or in our searches.”

Namur says the community always comes through to help the squad every year and whenever they ask for aid in purchasing new equipment it’s always paid off quickly.

“Anything that we can provide that would bring the anxiety levels down in a human would be an awesome thing that this dog can provide.”

Deputy Chief Ryan Leblanc says he’s thankful to the community for the support and the rescue squad is happy with how the organization continues to run and grow after 35 years of service.

“We’ve been called as far as Eastern Canada and our services are well known around this province and further than that. We’re excited to offer this service and Lloydminster Rescue Squad has a great group of volunteers and we’re able to perform and do well.”