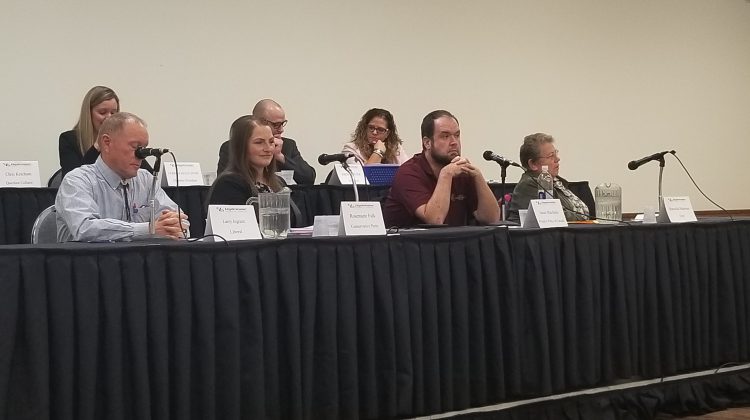 Candidates for the Battlefords-Lloydminster riding fielded questions at the all-candidates forum on October 10. (106.1 The Goat/Nikita Ganovicheff)

Lloydminster residents were able to hear from those looking to represent them in parliament.

The candidates addressed topics ranging from healthcare plans and climate change to rural crime and western alienation. When it came to talking about the future role of oil and gas in Canada, Liberal candidate Larry Ingram says he’s pro-pipeline.

“I believe we should put money forward to put in a pipeline. I was talking to someone from British Columbia and he said the pipeline that’s running right now was built in the ’50s and we should really get another one in before something like the pipeline break that Husky was responsible for on the North Saskatchewan River [happens].”

Shannon Stubbs was questioned how the Conservatives plan for climate change will help businesses grow. She says the party has three pillars revolving around creating new green technology.

“We would scrap the carbon tax and invest in green technology. We would work with provinces and municipalities and encourage the non-dumping of raw sewage into our waterways. We should sell our technology to India and China. If we invest in Canadians and encourage them to be innovative and create new greener technology, we can then turn around and sell that globally.”

In regards to balancing the budget, PPC candidate Jason MacInnis says the PPC will balance it in two years.

“We want to end corporate cronyism as a whole. No more corporate bailouts as we’ve seen they don’t work. Abolishing capital gains will bring investment back into the country. Right now, if you are one of the people that are worth more than $20 million the reason you’re there is because you don’t invest in Canada.”

When asked about helping students of all ages in a changing economy, Pedersen of the NDP says will increase funding in early education.

“Eventually, what we want is for all education to be funded period. Interest on student loans would be forgiven. The job that you get should not depend on having to pay for education. All education should be free for everybody.”

Green Party candidate David Kim-Cragg did not attend the forum.

Voters will head to the polls on October 21. Advanced polls are open and run until October 14.