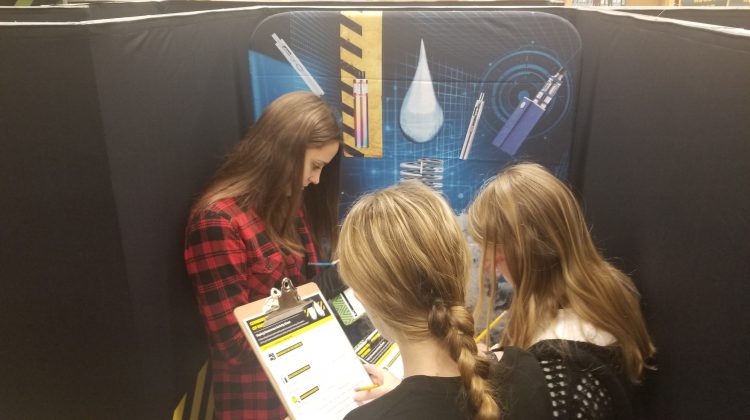 Students go through a maze and fill out a sheet with information on vaping. (106.1 The Goat/Nikita Ganovicheff)

Health Canada is warning youth about the dangers of vaping as the long term effects of the product are still unknown.

Health Canada brought the “Consider the consequences” campaign to Lloydminster Comprehensive High School on November 5. The organization brings an interactive maze to schools across the country and has students go through the maze to learn about the effects some of the chemicals in vaping liquids has on their bodies while they are young.

The exhibit is a part of the school’s life transition, health and wellness class which educates students on the effects of alcohol, drugs and cigarettes.

“People think it’s a way to cope with stress. It’s a new fad. It’s an excuse to look cool and do something else everybody else is doing. One of my buddies had to be rushed to the hospital because he had a really bad lung due to vaping.”

Shendaruk says he learned about the different chemicals that can be contained in some vape liquids as well as some of the chemicals that may transfer from parts of the device while using it.

“There’s tin and a whole bunch of harmful chemicals in vapes. You could be inhaling tin, aluminium and other harmful things to our lungs.”

Grade 11 student Devyn Haygarth says she didn’t know much about vaping products or the effects it had on the body.

“I didn’t know the problems that teens were facing with it. I thought it was something you could stop easily. I learned it goes much deeper into your brain development and social standards and what the effects are.”

She says more youths should learn about the chemicals contained in the liquids and the vape devices before using them.

The campaign made a stop at Bishop Lloyd Middle School on November 4. Health Canada started the campaign after conducting a survey which showed 23 per cent of students from grade 7 to 12 tried an electronic cigarette.