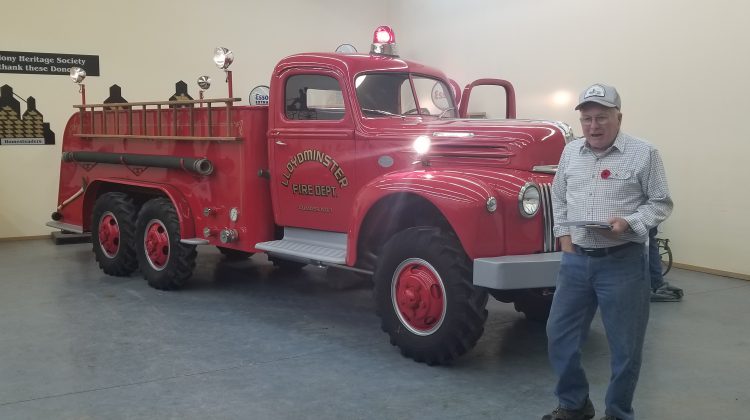 The Barr Heritage Society’s newly finished project won’t be staying in one place for very long.

Dick Arie, chairman of the Barr Colony Heritage Society, says the people of Lloydminster will be seeing the recently restored 40’s era fire truck will be out in the community.

The society held an unveiling at the Heritage Society Implement Building on November 8. Jack Robertson, one of the attendees, used to drive the same truck in Cut Knife as a second driver for the fire department from 1958 to 1967. 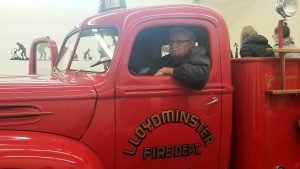 Jack Robertson sits in the fire truck again 50 years from when he first drove it. (106.1 The Goat/Nikita Ganovicheff)

“It’s great. It wasn’t this condition when I drove it,” says Robertson. “I remember this thing wouldn’t turn short enough when going into town so you end up driving into the ditch all the time.”

The truck was donated to the Lloydminster Cultural and Science Centre in 1984 where it sat in their collection until Arie decided to find partnerships and donations to help restore the pumper truck in 2017.

The project then began in March 2018 with a budgeted cost of $15,000. The primary donations came from the Richard Larsen Barr Colony Foundation who gave $10,000 for the project with the Barr Colony Heritage Society covering the rest of the budget with $5,000. Arie says there was some extra work needed for the motor.

“It was parked and had water in it and one head cracked. Overtime nobody paid any attention to it and the water ran into all the cylinders and rusted it right up. We thought we could salvage it so we took it to the machine shop and they tried to fix it but the whole block just crumbled.”

The final cost ended up at $17,600. Arie was able to get donations from several local businesses such as PWM Steel, Lloydminster Paint & Supply and Lloydminster Auto Club, among others, to help with the restoration.

“That’s what it takes to get done and that’s what makes this community different from many others. People are willing to help and they’ll go the extra mile for you.”

The restoration was done by members of the Society and Lakeland College instructors, Stuart Ribey and Matt Newman. Ribey also had a spare engine which he sold to the Society for the project.

“I projected that this project was going to take two years but both Matt and Stuart worked so hard on this thing that we were done in less than a year. We started working on in the fall and they came and got it in February. We did all the things we needed to do and drove it to [the Heritage Society Implement Building] in August.”

The project took an estimated 500 hours spent over summer to get the 1946 one and a half-ton back to working condition.

Arie says to keep an eye out for the truck at the Festival of Trees on November 28 and other community events in the future.