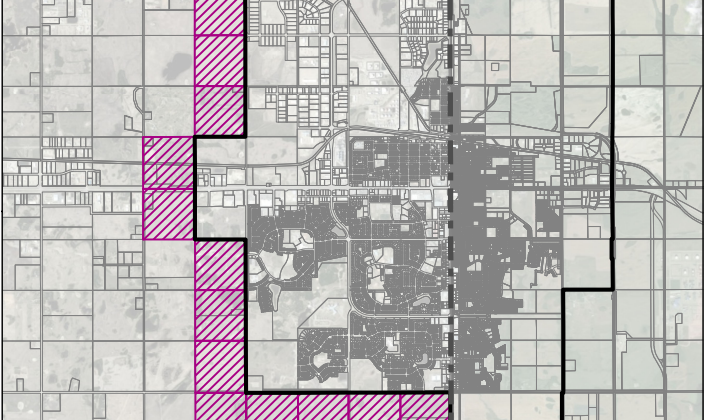 A map of the proposed annexation area. (Photo: City of Lloydminster)

The City of Lloydminster and the County of Vermilion River are on to the next step in the annexation process.

The two have finished gathering feedback from residents and stakeholders on the annexation draft plan. They will now be moving onto submitting an annexation application to the Municipal Government Board as well as completing a financial impact assessment and annexation transition plan.

The MGB could then hold a public hearing if necessary before recommending the annexation to the Minister of Municipal Affairs, Kaycee Madu. The final decision will then be made by the provincial cabinet.

County Reeve Dale Swyripa says the conversations that came from the engagement sessions held over the summer, one in Lloydminster and one in Blackfoot, were positive.

“The city and the county have been exploring strategies for mutual growth and development for many years and it is encouraging to see public support for moving this process forward.”

Mayor Gerald Aalbers was thankful to hear comments from residents on the process.

“We appreciate the many area residents who have asked questions and shared comments with us through our community engagement series and we look forward to providing more information to stakeholders as we embark on the next stage of the annexation process.”

The annexation would expand the eastern portion of the city’s borders. The annexation process began in 2011 and members of the city and surrounding municipalities entered negotiations in 2014.