Local middle school wraps up Movember with a bang 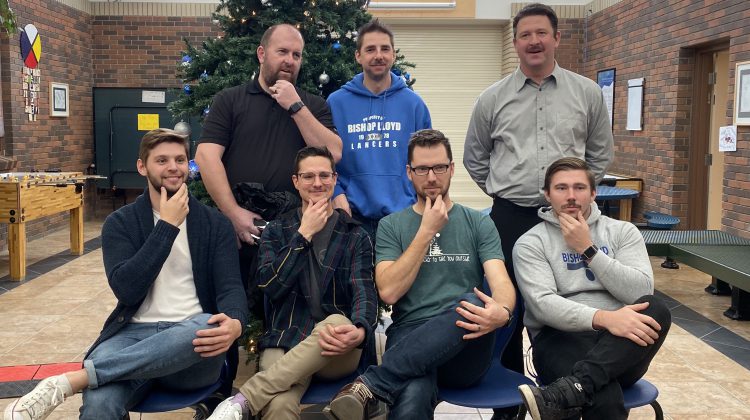 Eight teachers show off their mustaches before getting shaved off by students for Mow the Mo's, part of Movember. - 106.1 The Goat/ True Lazariuk

Movember has reached the classroom as Bishop Lloyd teachers participate in the event.

A grade eight leadership based class wanted to support prostate cancer awareness. The group of community builders hosted three events for Movember. The major event happened on Friday, November 11. Derek Hyland, the teacher of the class, says the class was hoping to raise $200 to donate. 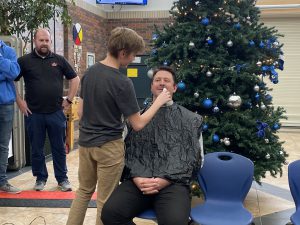 Bishop Lloyd Middle School’s Principal getting his mustache shaved as the students raise money for Movember, -106.1 The Goat/ True Lazariuk

“We shaved clean on November 1, and we’ve been growing (our beards) for the month. They are going to lead an auction for students to bid. The highest bidder will get to shave the face of the male staff member of their choice.”

This isn’t the first time the middle school has participated in Movember. Hyland explained that in the past campaigns have been put on by the staff, but this year the students put it all on. A student of Hyland, Chase Blythe, says that between the other two events they’ve raised almost $150.

“We have done Stash for Cash, which is, the boys can draw mustaches on the girls for $2 and Nails for Males, where you do the males nails with nail polish.”

Blythe explained that Hyland taught the class how to take part in Movember and how to donate.

“Any time I can get the students to take the lead, there’s more buy in from the student population. It’s 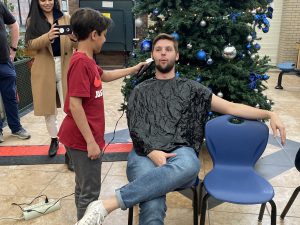 Teacher participating in Mow the Mo’s on Friday, November 29. -106.1 The Goat/ True Lazariuk

also is more of a sense of pride for them, of accomplishing something; and I think it’s really important that students experience that generosity where they can do something, to give back to other people because lots of people think that teenagers don’t have that, so it’s really good for them to have the opportunity to give back to the community,” says Hyland.

Once the student lead auction started, students where bidding. They seemed especially eager to shave their principals mushates off. Every teacher had a bidding war between the students.

Skyla Borusseau, grade eight student in Hylands class, says that her own had grows a mustache for the month of November.

“It’s really important to spread awareness about prostate cancer, and we are wanting to raise money for it.”

Hyland was one of the teachers to participate in Mow the Mo’s, although he says that he might miss the warmth the beard provided.

“I think prostate cancer, and cancer in general hits all types of families, all over our community and prostate cancer is really important. It’s a huge impact on men, but it’s also a huge impact that is curable. There’s a lot of spreading awareness is important but also just getting the students involved in something in cancer. It seems like something, so what are we going to do, there’s nothing we can do, and they can do something, that’s awesome.”

Movember wraps up on Saturday, November 30. Anyone can make a donate on Movembers website.