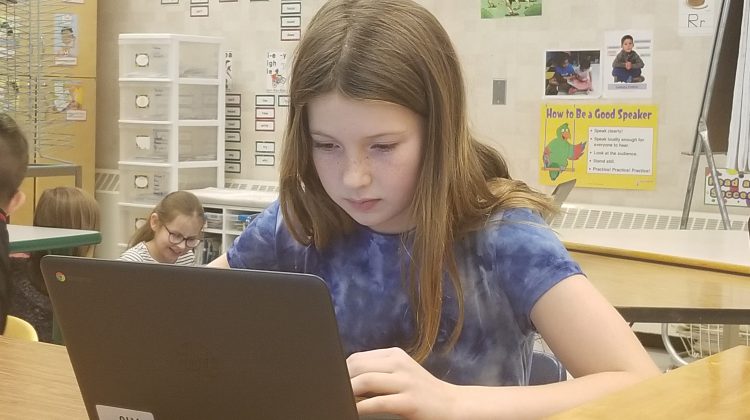 Naomi Brand looks to hit her 15,000 word goal at the Night of Writing Dangerously. (Nikita Ganovicheff/106.1 The Goat)

Students from Winston Churchill School spent some extra time in school to hit their goals for National Novel Writing Month.

Seven of the ten students from the Creative Writing Club stayed in school for an evening for the Night of Writing Dangerously. The night is a time for the students to write as much as they can to hit their goals before the end of the month and end of the main part of the project.

Naomi Brand was originally targeting a 10,000 word novel for the month and has surpassed it and is 800 words short of her new goal of 15,000. Brand set up a daily word goal which she says she hit most of the time and would sometimes write even more.

Brand wanted to write a story in the fantasy and horror genres and throughout the month she added more horror elements to the story. She says the hardest part was trying to keep a balance between developing characters and moving forward with the plot.

“I tried to keep the same plot but sometimes it’s hard not to get a bit sidetracked. If you put too many details on certain things you’re not going to get much on your plot. It’s hard sometimes to not stay on one thing and sometimes it’s difficult to move on to the next part of your story.”

She says part of the reason she got sidetracked was that she wrote more characters into her story than she first thought. 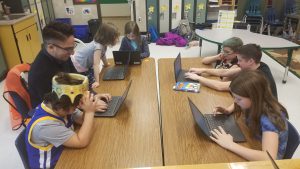 Students from Winston Churchill School are putting in one last effort to hit their NaNoWriMo goals. (Nikita Ganovicheff/106.1 The Goat)

This is the third year Jessica Brown has participated in NaNoWriMo and was 200 to 300 words short of her 1000 word goal. She wrote a fantasy story about wood elves.

“I feel that in the school year you get to finish your story and I think I’m going to finish the story for the first time this year.”

Jessica says the easiest part of participating in NaNoWriMo is the beginning of the story.

Jenson Brown says NaNoWriMo helps reinforce the love of writing in the students and it allows them to delve into their interests and experiment in writing. He says the students were dedicated and most will hit their word goals by the end of November.

“Every time you turn around you see someone hitting a target or getting a good idea or those smiles from somebody who is a little bit self-conscience about their writing at the beginning of the month. By the end of the month, they’re coming to you in the hall saying ‘Guess what we wrote.’”