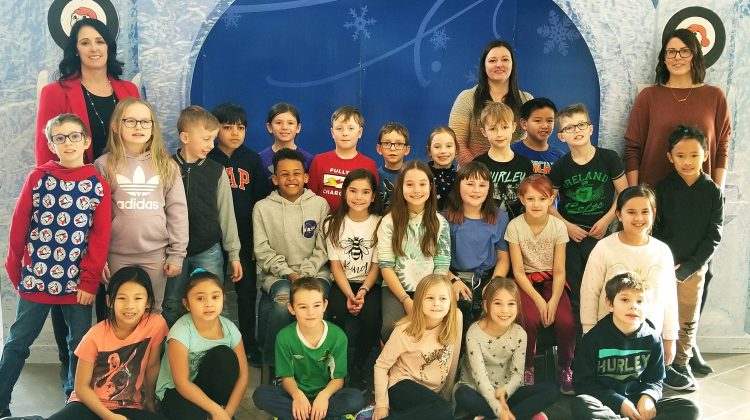 Mlle Annick LeBlancs grade 3 class got out of the classroom to do some activities in French. Photo submitted by: Nikita Ganovicheff. mylloydminsternow.com

The Lloydminster Catholic School Division is celebrating providing French Immersion to Lloydminster students for the past 35 years.

École St. Thomas will be holding their annual Carnaval from February 4 to 7 and it will be their biggest yet. This year, they are asking for French Immersion alumni to visit École St. Thomas at their opening ceremony to celebrate the program’s past.

Principal Lisa Marie Kreese says the program has grown significantly since it was first introduced in 1985. It started with 28 students in Kindergarten and grade 1 at Mother Theresa and every year after the division would add another grade to the program.

“When I came in 2002, we had 148 students in the program which had grown into high school. By the time we celebrated our 25th, we had about 300 and some students and now we have 550 students. We’ve been an anomaly in the government for a while for growth at this rate.”

Seventeen years ago, Kreese took on the role of principal of École St. Thomas with the aim of building the French Immersion program. She says there were a lot of worries and fears coming from parents who wanted to enrol their children into the program but didn’t speak it themselves.

She says it took some time but as more people took notice of the support from teachers and staff the more the program grew. Kreese praises the teachers who create an environment where children can push their language skills in the school.

“I believe in finding excellent motivated staff who have a passion for languages and have a desire to see that grow in the children.”

LCSD Director of Education Nigel McCarthy echoes the sentiment and commends the work done by the teachers.

“That’s where the quality of it comes from. French Immersion isn’t just something anyone can do, it takes a very special person to and we’re lucky our leadership has grown up as francophone in Saskatchewan.”

As someone who went through a French Immersion program himself, McCarthy says there are plenty of benefits for students including increased literacy to more job opportunities.

“The advantages can be as simply being able to communicate as they cross Morocco or France in their teenage years or in their 20’s or it can be working for the government of Canada. There’s a huge gambit of successes that evolve out of this program for the children that choose to pursue this program all the way to grade 12 or beyond.”

Kreese points at the active nature of the program as another reason for its success. She says by having students take part in dancing and everyday activities in French helps them get a better understanding of the language.

“Learning a second language has to be experiential. You have to use it, play with it and have fun with it in order for it to stick. It’s no different than learning math. You can teach paper math all you want but when you bring out the manipulatives then the children will learn.”

Carnaval will continue for the students throughout the rest of the week. They will take part in many different activities including snowshoeing and la tire d’érable (maple syrup on snow.)

The 35-year anniversary falls in the same year as the 50th anniversary of French Immersion and Francophone schools being offered in the province of Saskatchewan.