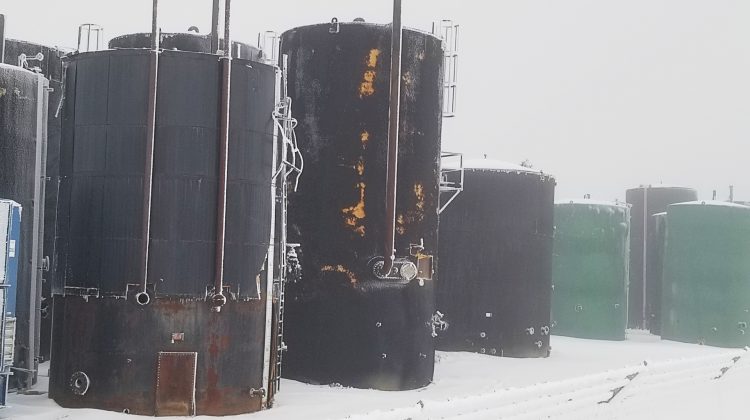 A business owner in Reinhart Industrial Park wants the suspects involved in a string of break ins caught. (Photo submitted by: Nikita Ganovicheff/mylloydminsternow.com)

A local business owner in the Reinhart Industrial Park is getting fed up with the recent string of break-ins and thefts.

They run a shop in the park located near Lloydminster Airport and asked to stay anonymous as they were worried they could be targeted again.

The owner says the lock on their gate was cut off and their shop was broken into the night of January 18.

They say the break-ins are all connected. The following night a nearby business was broken into and the thieves used vehicles stolen the previous night.

“Sunday, they hit Calroc and the same thing happened. They had used the trucks from the night before to steal another three trucks from their yard and tools, laptops and paperwork.”

The business owner says they’ve installed more security cameras and other preventative measures to their shop but is worried the thieves could come back as they have keys to the company’s vehicles.

The stolen property was later found on an acreage south of Lone Rock and returned to the owner. They say they are more vigilant now and one night while locking up, they noticed a couple of trucks driving past at a high-speed. They followed down to Range Road 13 near Rolling Greens which is a dead end. They attempted to stop the thieves by blocking the road with their truck but the thieves drove around through the ditches.

“We do not want anybody to take matters into their own hands. You might think that you are helping our investigation by surveilling these suspects or confronting them but what you are actually doing is putting yourself in danger and could be jeopardizing the investigation. It’s very important that you let us do our job and if you do see something report it and let the police handle it.”

Cst. Hagle confirms that the thefts are connected and the RCMP are investigating all leads.

The business owner says getting information from the RCMP is difficult as the crime spree goes through three different detachments from Alberta and Saskatchewan. They say they found a stolen vehicle in the past week and reported it to the police.

“As far as I know, and the police might argue with me, the police are just towing these vehicles once they find them but nobody is going to jail. That’s what pisses me off more than anything. We’re not going to stop the crime until we stop the criminals and there’s a lot of vehicles to steal.”

The owner says TBar1 Transport, Calroc Industries, Tri-Power Solutions, Secure Energy Services, Chrome Diesel Repair and many others have been broken into in the past few weeks with some getting hit twice.

Cst. Hagle says crime prevention is the main focus for the RCMP detachment and advises all residents to report any suspicious activity to 780-808-8400. He also recommends property owners to leave lights on at night, have a locked gate at the entrance and install a security system.