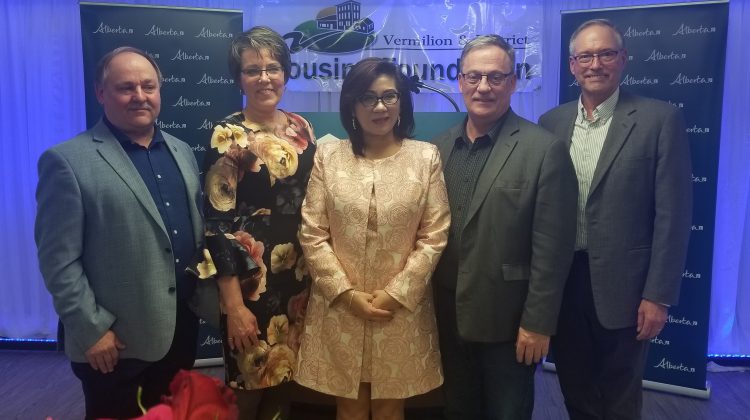 Vermilion residents and government dignitaries celebrated the completion of the Vermilion Valley Lodge renovations with a grand opening party.

The seniors housing complex began construction on their C-wing in March 2017 which modernized 50 rooms and increased each room’s size. The $14 million project was funded by the Alberta government, the town of Vermilion, County of Vermilion River.

Board Chair for the Vermilion & District Housing Foundation and Mayor of Vermilion Caroline McAuley says the residents are excited to move into their new rooms.

“These were rooms from the 1960s so they were very small and people would have to take a shower down the hall. Now it’s totally modernized it and we took the opportunity to rebuild our kitchen, laundry facilities and mechanical structures. The lodge is set to go and we’re excited to open these rooms.” 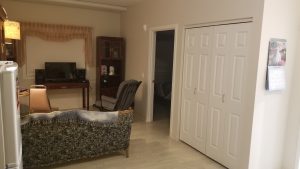 The room sizes were increased and bathrooms include walk-in showers. (Photo submitted by: Nikita Ganovicheff, mylloydminsternow.com)

Along with the renovations, the community raised over $1.5 million in over a year through fundraising to buy furnishing for the complex. Minister of Seniors and Housing Josephine Pon has been touring the province speaking with senior housing groups in several communities. She says she’s amazed at the work done by the community in supporting their seniors.

“With this project, in the short term, they raised $1.5 million. It’s absolutely amazing and shows how close the smaller towns are and how they help each other. They treat the seniors so well and with respect.”

McAuley says there are still some improvements to be made to increase the quality of life of residents such as a walk-around deck in the garden and new recreational programs.

She says with the renovations finished, the foundation is now looking at bringing level four senior housing in the community.

“We have a gap in our community between our current supportive housing and our long-term care and residents have to leave the community. We’re working with the government, we have a really innovative idea that we’re presenting and are just waiting for the budget.”

The Vermilion Valley Lodge has a total of 84 rooms for seniors and offers care and support to those who aren’t able to manage their own homes.