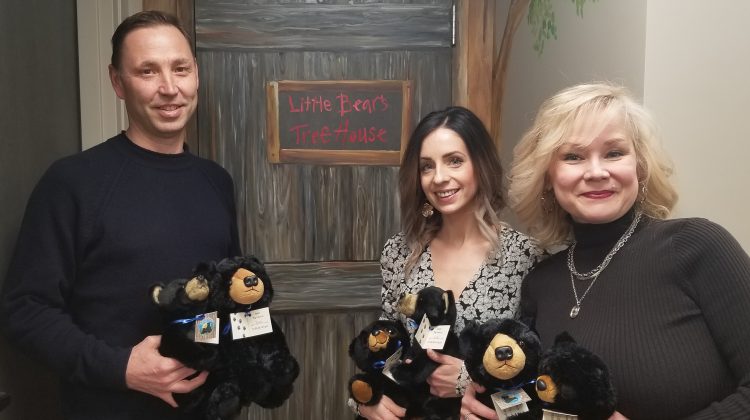 The Border City Rotary Club will be donating part of the proceeds made from their Irish Pub Night to the Lloydminster Sexual Assault Services Teddy Bear project.

Little Bear Advocacy and Engagement Director Tammy Lynn Adamson says the project will put a teddy bear in the hands of the youths who’ve experienced abuse that come through their doors.

“It can be physical, sexual, neglect; anything like that. If they’ve gone through that then these bears are a way to ground and support them through whatever they’re going through.”

The youths will also be getting a bag with snacks, small toys and a change of clothes. There are three different bear designs which they can choose from which Adamson says helps them feel empowered.

“There’s been studies done where it shows it helps with social development and language and other pieces too.”

Adamson thanks the Rotary Club for their help and naming the project as the beneficiary of the club’s biggest event. She says community partnerships continue to help the organization grow.

“We wouldn’t be where we are as a centre and the growth that we’ve had in the past 35 years, without the support of community partners. It’s about awareness and education. It doesn’t just end when you close the doors at LSAS. It’s about these events that people are able to talk about LSAS and look at what communities are doing.”

Karla Ehalt, lead for the event, says the Rotary Club focuses on supporting youth-based projects and the Teddy Bear project stood out from other possible candidates because it was youth-focused.

“Our group absolutely loves the project that has been brought forward to us and we’re looking forward to working alongside them and bringing more awareness of what they offer to our community as well as the teddy bear project. It’s a great initiative and we stand behind it 100 per cent.”

She says Rotary has held an Irish Pub Night for at least the past 10 years and hopes people can attend and show their support for LSAS.

“It’s our biggest and basically the only fundraiser that we do. It’s where we pull in the most funding and allows us to do projects like the teddy bear project but also other projects within our community.”

Integra Engineering is the lead sponsor for the event. President Evan Stephens says the company is always looking for ways to give back to the community.

The Irish Pub Night is scheduled for March 21 at the Stockade Convention Centre.

Military standing by if needed