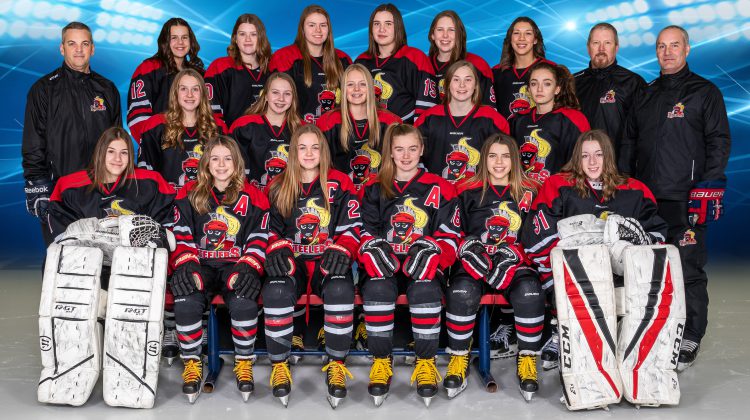 A group photo of the players and coaches of the Junior Steelers bantam elite team. (Photo submitted: Ryan Sklapsky.)

A Lloydminster female hockey team has won the bid to host the 2020 Hockey Alberta Provincial Championships this month.

Director of hockey operations Ryan Sklapsky believes hosting provincials will have a different meaning for all the females. With the 2005 born females being able to carry momentum from this year’s tournament into next year and the 2006 born players having their last bantam hockey games.

“You never know when you are going to be able to qualify for provincial championships. To be able to host in your own centre with your friends, family and other guests is a cool opportunity.”

“We’re hoping the bantam elite championship and the Esso Cup in 2021 will give a lot of girls that are in the younger age groups a good chance to see the calibre of hockey that needs to be played in Lloydminster and provide them with an opportunity to see what other teams are doing in Alberta.”

With Hockey Alberta rotating who hosts the tournament every year, Skylapsky says the organization knew it was coming to one of the six teams in the north.

He says Lindsay Hines and Cori Eaton, team managers, prepared all the information needed for the bid on November 4th, 2019 with Hockey Alberta accepting the big on December 2nd. The host organizing committee, featuring parents of the players, is preparing for when the guests arrive for the tournament.

“It has been a real collaborative effort between the parents on the Junior Steelers team in order to host this championship and have a quality event that Lloydminster minor hockey and the city could be proud of.”

The 2020 Hockey Alberta Provincial Championships will take place at the Civic Centre from March 19th to 22nd. The bantam elite playoffs begin this weekend with the Steelers hosting the St. Albert Chargers at 7:30 p.m. at the Servus Sports Centre.