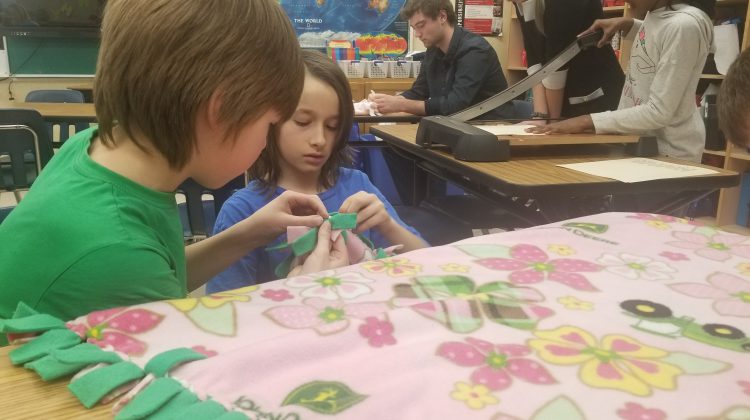 Wyatt Moffat (in blue) ties up one of the blankets. (Nikita Ganovicheff, MyLloydminsterNow.com staff)

The blanket donations are St. Joseph’s contribution to the Kindness Wins campaign which had students all over the city participate in different projects to spread compassion in the community. Grade 5A student Wyatt Moffat explains what went into the project.

“We are tying strips to the blankets for decoration and to keep them together. We are having little prayers from St. Joseph and we’re shipping them to the two places.”

Moffat says the Grade 5 class have buddied-up with students in Grade 2 to help them with the project. The older students took care of making the blankets while the younger students wrote out the prayers on cards which will be paired with the blankets.

The idea of the project came from the Grade 5 teacher Christina McGarth who was looking to help out the city’s homeless population with their Kindness Wins grant. The grants are given to schools across the city by Beyond Borders Circle of Change.

Initially, McGarth wanted to make backpacks filled with items, however, after pricing it out she found the grant would only cover two bags worth. McGarth then brainstormed with others and decided on making blankets. She found they would have enough money to make four.

After hearing the idea, one of McGarth’s co-workers pointed her towards The Survivors Blanket, a local initiative that donates a blanket to the Lloydminster Sexual Assault Services for every blanket sold. McGarth was able to get in contact with the head of the initiative Jayden Hutchinson.

McGarth also brought in Executive Director of the Men’s Shelter, Valerie Lazicki, to speak to the class and share what kind of impact the blankets would have on the people who use the shelter.

She says the goal of the project is to help students learn of the reality that some people have to live with.

“It’s real. You can’t always be sure what life is going to be like for people but know that you are not alone.”

Moffat says he and his schoolmates are also learning how to pay the kindness forward with the blankets.

“I feel happier and excited to help out a lot of people.”