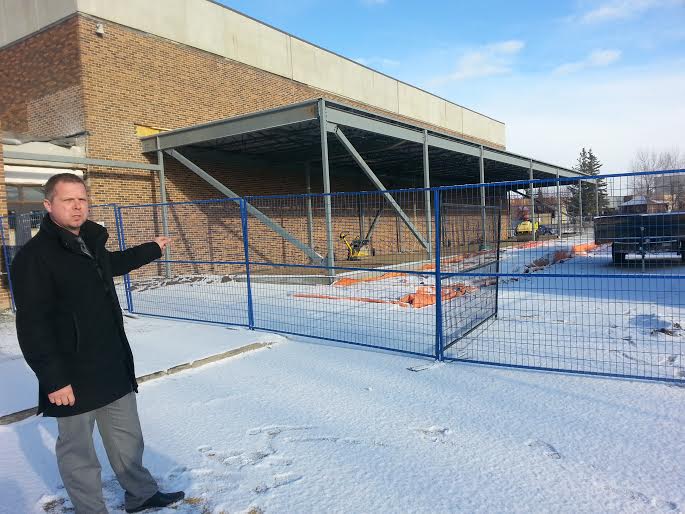 The Lloydminster Comprehensive High School has begun construction on a new field house.

The facility will be attached to the gym when it is finished, and comes with a price tag of $1 million. Todd Robinson, director of Education with the Lloydminster Public School Division, says the building offers significant upgrades.

“The field house will offer us a chance to build a formal locker room for our Barons football team, as well as our other athletics teams here at LCHS,” Robinson said. “There will be a visitor change room, as well as some access to some washrooms from the exterior of our building, and also a coach’s area inside the field house as well. So, certainly improvements for not only our improvements here, but for the community in general.”

Larry Sauer, chair of the Barons Football Alumni Association, was on hand for the announcement. He says the upgrade was needed.

“This facility is going to be a great benefit to the Barons,” Sauer said. “We’ve had the same dressing room for many, many years, and when we were nine men back in the ’70s and early ’80s, [it] worked out not to bad, but when you get up to 50 players, playing 12 men, it’s really been cramped quarters up there. Nostalgic, but cramped quarters, so this is a very welcome addition, and we’re certainly glad to see [it].”

Dwayne Marciniw, principal at LCHS, says he believes the field house will have a positive effect on students.

“I think it will have a significant impact on our student culture, and the ability to offer and host athletic events,” Marciniw said. “I know right now, our change facilities are a little bit dated for some of our sports, so [it] just really enhances the culture, and the pride that our students take in participating as an LCHS Baron.”

Robinson says the school division expects the field house to be finished construction in March, in time for the track and field season.