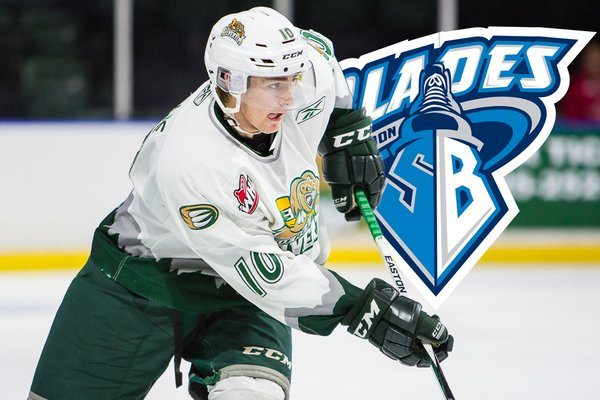 Lloydminster native, Jantzen Leslie, has been traded to the Saskatoon Blades.

Leslie played 10 career games in the WHL, all with the Silvertips, registering 3 assists. He was picked in the 1st round, 15th overall, in the 2014 draft. At 6’1″ and 170 lbs, Leslie plays the role of a shutdown defenceman.

“It’s always exciting playing for a team that’s a lot closer to home,” Leslie said. “You just have that extra energy knowing that there [are] people you know watching, and your family can see you that much more. It’s a lot nicer than being 15 hours away, and just feeling out in the middle of nowhere, so it’s extremely exciting being close to home.”

With the move, Leslie is going from a Silvertips team that is 6th in the Western Conference to the Blades, who are in 9th place in the Eastern Conference. Leslie says he’s optimistic about the Blades’ chances.

“I feel they can compete just as much as Everett can,” Leslie said. “It’s not that much of a difference to me, the attitude doesn’t change towards anything, especially this season. I just want to compete as hard as I can, and help these guys win, and I know that they want to compete as hard as they can to win, so it’s a great fit, and I think that we can make a push for the playoffs.”

Leslie has experience with some Blades players, having been a teammate of fellow Lloydminster native Chase Wouters on the Bobcats Midget AAA. He has also played with fellow traded Silvertip Anderson and Blades forward Josh Paterson on the silver medal winning Team Alberta at the 2015 Canada Winter Games.