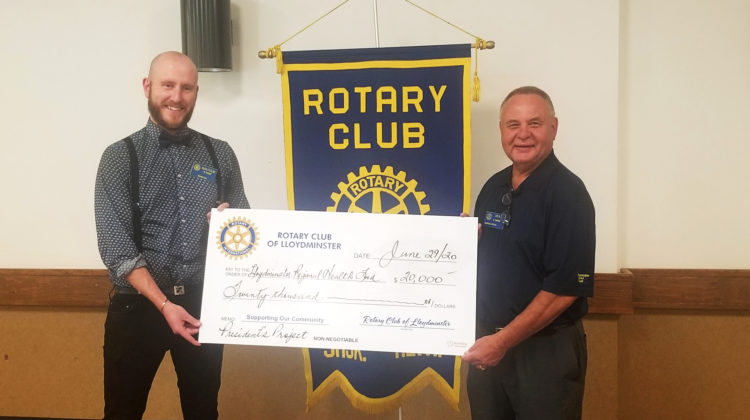 The Rotary Club of Lloydminsters outgoing president is making one final donation before handing over the title to another member.

Stan Bugiera donated $20,000 to the Lloydminster Regional Health Foundation at the final Rotary Club meeting of their scheduled year. Every year, the club president makes a donation to an organization of their choice. Last year, the donation was made to the Vic Juba Community Theatre.

The money was split evenly between the LRHF’s COVID-19 Community Emergency Fund and the mental health initiative Project Sunrise.

“We’re proud that we’re supporting local and trying to get everybody better off going forward,” Bugiera says. “The health foundation is something I’ve always been passionate about. It’s local. It helps everybody. It’s not restricted to a certain group so we all benefit.”

LRHF CEO Malcolm Radke was present at the meeting to accept the donation and says the Rotary Club has been instrumental in finding PPE when they launched the emergency fund.

“We knew from the get-go if the need was there for local physicians or any frontline staff of any type we weren’t going to say no. We had some cash in reserve for days like the COVID-19 pandemic. It’s been surprisingly very well supported from a variety of people.”

Radke says their next projects will look at bringing mental health stabilization beds in Lloydminster and form a police and crisis team (PACT) unit. The unit pairs an officer with a mental health professional who will respond to calls related to mental health.

Bugiera says the club wasn’t able to hold most of their regular fundraisers, such as Lobster Fest, this year due to the pandemic. But, he says they did their best with other projects like their Dream Vacation where they increased the ticket count by another 100.

Despite distributions in the past few months, Bugiera says they’ve had a successful year with supporting the Interval Home Society, contributing to a water well and a school project in Honduras as well as continuing their school project in the Philippines.