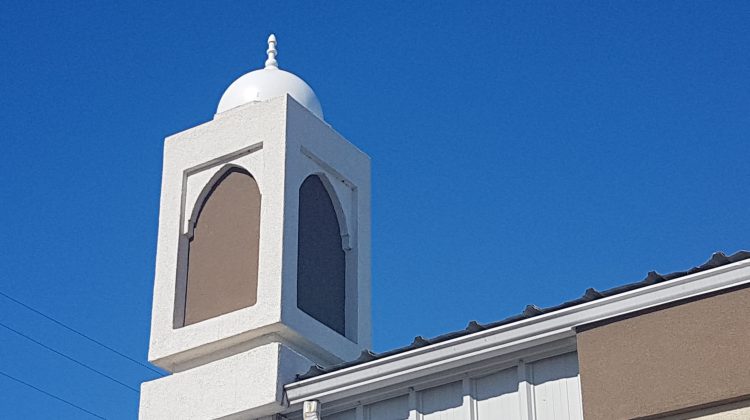 An architectural feature of the Ahmadiyya Muslim Community's mosque. (Brendan Collinge, 106.1 The Goat)

With COVID-19 continuing to put restrictions on large social gatherings, many of Lloydminster’s different places of worship have had to adapt.

Many churches have sought out an online method of service delivery, regularly live-streaming religious assemblies to their congregations. One of these churches, Grace United, says they’ve had a smoother transition to online as they already had the infrastructure built-in. They’ve also been pre-recording videos, from ministers, scripture readings and hymn singings.

“For the couple [of] months we were shut down, we had a massive surge in our services. So people that maybe hadn’t paid attention to us before were kind of looking for a church, or people that were church shopping. So we actually saw more people, we saw our numbers of people watching on Facebook, or waiting to get involved on Facebook actually increase.”

Grace United is also tentatively looking at September to begin the physically bringing back people, including holding community services such as Alcoholics Anonymous.

In the meantime, some faith services have begun the cautious process of opening their doors again. One of these locations is the Baitul Amaan Mosque, which opened physically on June 12th. They also say they’ve seen people wanting to get back into the mosque physically again, especially after being closed for the Islamic holiday Eid al-Fitr. The mosque has re-opened in time for the second major Islamic holiday, Eid al-Adha, which is this weekend.

Imam Manzoor Azeem says worship is looking very different compared to how Muslims usually pray. Even for the holiday, which normally brings 90+ per cent of Lloydminster’s Ahmadiyya Muslim Community’s in, they’ve had to limit the number of people in the mosque.

“During COVID-19, we have specifically marked the places that you cannot stand together, because we have to follow the physical distancing protocols. So it was very different. People are standing away from each other instead of people standing shoulder to shoulder, toe to toe. So it’s very different, it’s the first time I’m seeing this kind of prayer in my whole life.”

Azeem adds that they’ve also put in hand sanitizer stations and other health guidelines, and encourages people to visit to worship or to learn more about Islam.