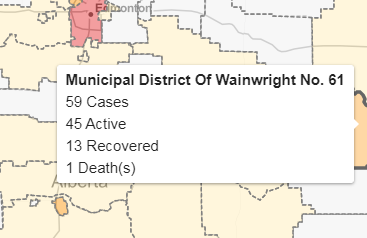 One more COVID-19 case in the M.D. of Wainwright is considered to be recovered. According to Alberta Health, there are 45 active cases, 13 recoveries and one death in the municipality as of August 12th.

No changes were reported in the County of Vermilion River which has five active cases and eight recoveries.

Provincially, there were 76 new cases out of 7,746 tests completed in Alberta. There are 1,036 active cases in the province and 10,713 cases have recovered.

In the Central zone, there are 88 active cases with eight people being treated in hospital. A sixth fatality was reported in the zone. A total of 451 cases in the zone are considered to be recovered.