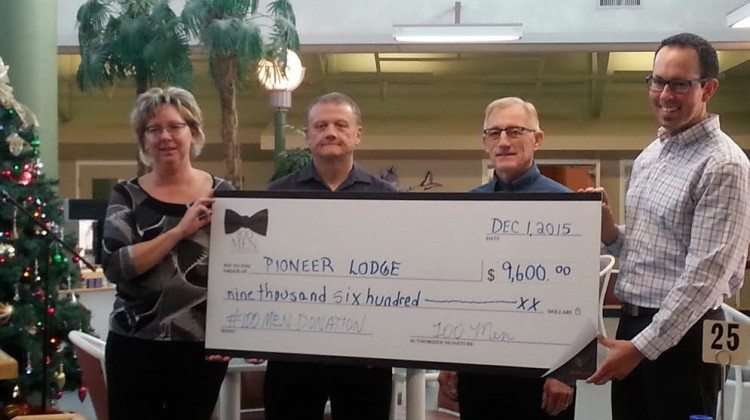 Pioneer Lodge has received a donation from 100 Men Lloydminster.

The seniors’ home was presented with $9600, collected at the group’s December meeting, to be put towards renovations to washrooms in the Atrium Suites. The suites will be replacing their tubs with a 16-inch clearance to walk-in showers with a 3-inch clearance as well as raising toilets and lowering sinks to make them easier for seniors to use.

“This type of shower has been put into the newer wings, so the couples’ rooms and two of the new wings have them,” said Karen Stenger, activity coordinator with the lodge. “[The atrium] rooms were built in 1976, so it’s well overdue.”

Stenger also says the washrooms will provide seniors with a greater level of independence due to their ease of use.

Rob Anderson, co-founder of 100 Men Lloydminster, said the group heard from the lodge at their December meeting. He said the decision to make the donation was based mainly on two reasons.

“I think the one point that [Stenger] made in making the presentation to the group was that if you don’t know someone who’s in the lodge now, chances are, in the next few years you will. So I think it’s going to be an ongoing need, an ongoing resource in the community,” Anderson said. “I [also] think that not only the fact that you might know someone that’s in here, but also the fact that, for the seniors that are going to be residing in that suite, they’re going to be more independent.”

Stenger says that she plans to renovate 12 bathrooms, and so far has money to renovate 3 of them. She also says the project will be a long-term one, as they have to wait for a room to become free before it can be renovated.