Active COVID-19 cases are now at four in the area housing Lloydminster, The Battlefords and other surrounding towns.

Both the Battlefords zone and St Walburg/Turtleford area have zero confirmed active cases. The Lloydminster and district subregion and the Cut Knife Wilkie zone have two cases apiece.

Across the province, there were four new cases confirmed as well. One case each was found in the North Central, South Central, Central West and South-West zones. Of the 1,638 reported cases since the pandemic began, 36 are considered active.

There were also four more recoveries, making for a total of 1,578 people recovered. 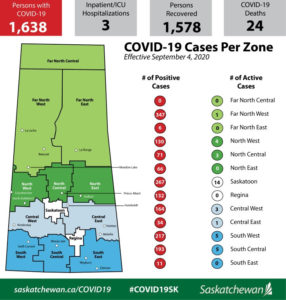