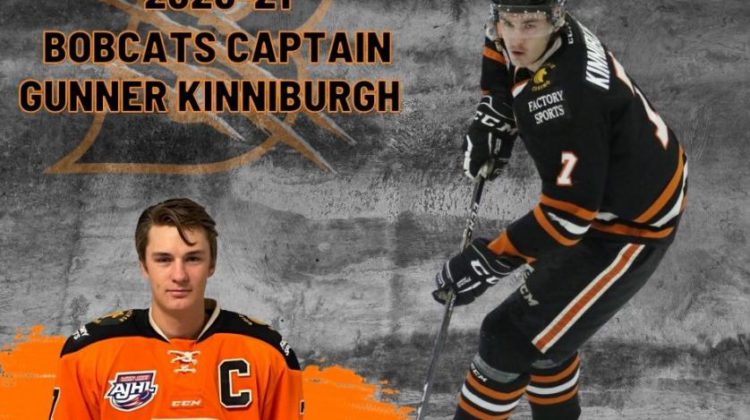 The Bobcats have named Gunner Kinniburgh as the new captain. [Lloydminster Bobcats]

The Lloydminster Bobcats have named a new captain ahead of 2020-21 season.

Defenseman Gunner Kinniburgh has been given the C and will be guiding a 14-person younger squad, many of whom are returning from the 2019-20 season. Kinniburgh himself is in his second season with the Bobcats after being traded to them from the Fort McMurray Oil Barons a year ago.

Head Coach and GM of the Bobcats Nigel Dube said in a statement it was important for them to pick a captain before the season started, with the largest core group of players coming back in several years.

“It is a very exciting day for us to announce Gunner as our captain before we get back on the ice next week. Gunner has a ton of experience in our league and knows our organization and what is needed leading the group forward.”

Kinniburgh is in his fourth season in the AJHL. Over that time, he has racked up 36 goals and 170 penalty minutes in 170 games. In his first season with the Bobcats, he put in sixteen assists and two goals, with sixty penalty minutes.

He will join the leadership on September 15th, when the team gets together for training camp. The team will be in this development season, which will have only the team and no spectators until the league determines when to start the season. This is due to COVID-19 regulations and guidelines, which the team is following.

The Bobcats encourage fans to keep an eye on their social media, where they will unveil more details about the upcoming season when it is available.