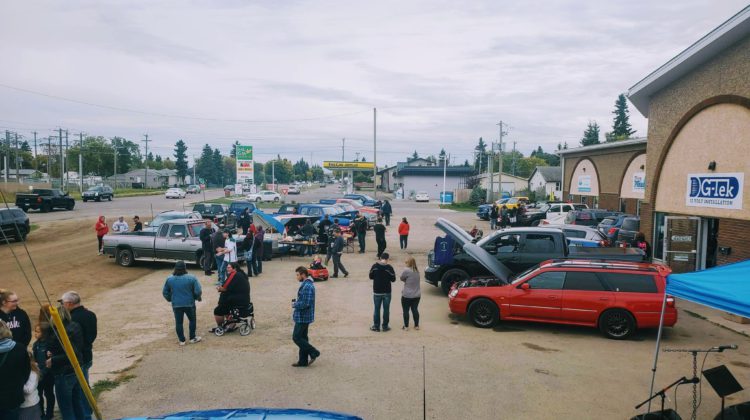 The Lloydminster Motor Club says they had a solid turnout for their charity barbecue and were able to raise funds for local causes.

On September 12th, the car club held a barbecue, live music, silent auction and car show in support of three local charities. With the help of the Border City Rams and Saskrams, they were able to raise funds for Pratt’s Posse for Muscular Dystrophy, The Canadian Angelman Syndrome Society and The Goat’s Christmas Wish.

LMC Founder Randy Marsh says they did not know what to expect in terms of turnout due to COVID-19 rules, but says he saw dozens of people join in throughout the day.

“Everyone was having a good time, we had live bands and a wide variety of vehicles out. We were raising a bunch of money for the three charities, and just all around it was a great turnout and everyone had a great time. We were so excited with how it turned out.”

The event ended up raising $905 each for all three charities. Marsh explains that this is part of the LMC’s commitment to helping the community, and he’s grateful for the community support as they put in the work on these events.

“It puts into perspective that a lot of people share the same mindset as you, they do care.  There’s not as much community involvement, especially with this COVID stuff, so it’s nice that the community was involved in this, and they said ‘we care, here’s our help.'”

Saturday also saw Marsh announce that he’s stepping back as leader of the Lloydminster Motor Club. He adds that the two new “Head Honchos” will be working with the rest of the club to ramp up community events.