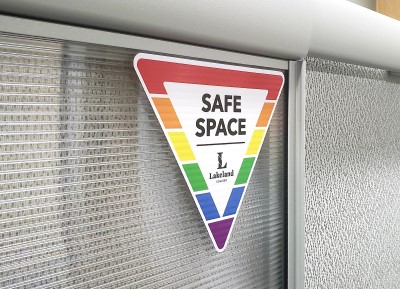 Lakeland College’s LGBTQ2S+ inclusivity strides will now be used as a way for post-secondaries across the province to build models for themselves.

The school was recently among nine across the province featured in the Healthy Campus Alberta Mental Health Toolkit. The Toolkit was created by Mount Royal University, seeks to help colleges create and implement mental health initiatives, as well as have a way to develop ideas based on what other post-secondaries are doing.  In turn, they hope to create a happier and healthier environment for students to learn in.

Lakeland’s LGBTQ2S+ Student Support Group’s initiatives like Coming Out Stories, Prom You Never Had, Pride Awareness weeks and Safe Space Stickers were all showcased as ways other schools can plan out making their campus more inclusive to different sexual orientations and gender identities.

Former President William Yap says that it’s an important time to have LGBTQ2S+ wellbeing in a mental health toolkit, as someone trying to find their LGBTQ2S+ identity can be a lot to deal with while also in school. He adds that by staff and students how to discuss gender identity and sexual orientation, it can build a deeper support network before a student hits a crisis.

“Not only are our students dealing with midterms and finals and anxiety, and whatever other issues that they currently have, but they could also be going through coming out. They could also be going through their experiences of maybe losing some people in their life that they hoped would stay. This is something that not every student has to face, but every student deserves to have the resources available for them.”

Yap explains that much of the group’s approach was through education. He says when he started. many students were not yet fully aware of LGBTQ2S+ issues, and he has seen tremendous strides since then.

“Now a lot more students within the college are learning to use appropriate pronouns, and if not to ask when they see someone that may not be presenting as a binary individual. I think that going from not knowing what the acronym stood for to now knowing how to properly ask someones preferred pronouns is a huge leap.”

The work of the LGBTQ2S+ Student Support Group has already begun to have impacts around Lakeland’s Lloydminster and Vermilion Campuses. In recent years, the Vermilion Campus has opened a Gay-Straight Alliance, documents have been changed to use gender-neutral language and Safe Space training has been undertaken at both campuses.

Learning & Teaching Chair Michael Diachuk says Lakeland’s work in the Mental Health Toolkit will have an impact for both Lakeland and post-secondaries as a whole in Alberta, and foster a healthier conversation about LGBTQ2S+ life on campus and the community.

“A college as small as we are, and the changes that we made, I think is to example to other institutions that it’s not impossible, it’s a worthwhile endeavour, and when you see what can be accomplished particularly by providing that space and support for leaders like Will [Yap,] it’s amazing the difference you can make in the lives of people.”