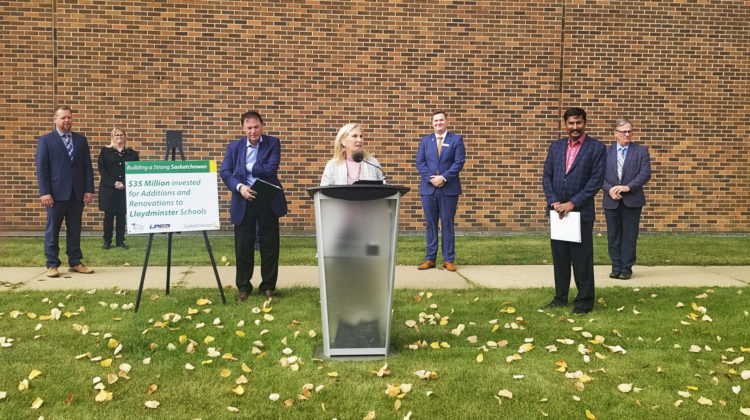 Planning is now underway for the new expansion at the Lloydminster Comprehensive High School.

MLA Collen Young and MLA Garth Rowswell were joined by political officials from both sides of the border and members of the LPSD board to announce a $25 million investment into the school. The high school will be getting a second floor which will add another 16 classrooms to the building allowing another 400 students into the school.

Lloydminster Public School Division Board Chair Karoline Kennedy says there will also be a new gym or field house as part of the plan.

“Lloydminster Public has a priority of wellness and we’ve identified this as one area that we are lacking and really need. We’re really excited about that. We’re not sure what it’s going to look like yet, but that’ll be a part of the planning process.”

The investment will also go towards electrical and mechanical system upgrades and support space. The costs for renovation will be split between both provinces. Kennedy says funding will be based on the student population with roughly 55 per cent coming from Alberta and 45 per cent from Saskatchewan.

Saskatchewan Deputy Premier and Education Minister Gordon Wyant says the upgrade will not only help students in the long-term but also the local economy in the next few years.

“To the greatest extent possible, we’ll be working with the Government of Alberta to make sure it’s the local economy that benefits. Part of the significant capital commitments that both provinces have made is to enhance the economic recovery in our respective provinces.”

Wyant says the investment is also a part of the $7.5 billion two-year capital plan to stimulate recovery in the provincial economy. Alberta Minister of Infrastructure Prasad Panda says their funding comes from the $10 billion in infrastructure funding in the Alberta Recovery Plan.

The expansion is expected to be wrap up in 2023. Once construction is complete, the division will begin transitioning Grade 9 students to the high school.