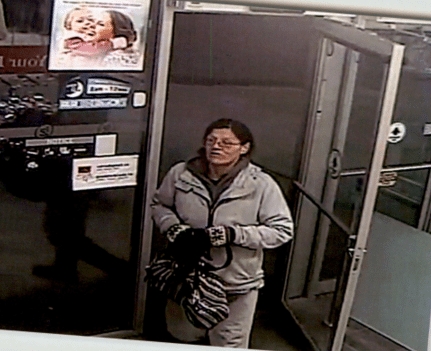 ***UPDATE***
January 4th
Battleford RCMP have arrested and charged a 41-year old-woman from North Battleford in connection to this incident.
The accused was kept in custody until her first appearance in North Battleford Provincial Court, yesterday,  January 4th at 930 a.m. She faced one count of Robbery with a weapon.  However, she will face several other charges, including Fraud and theft in connection with other reported matters.
The investigation is ongoing as new evidence indicates the accused was also involved in a robbery at a store at the Frontier Mall on the evening of December 19th, 2015 where she threatened to stab a staff member with an edged weapon, who confronted her after the accused was witnessed stealing clothing. Two additional charges of Robbery in connection to this incident were scheduled to be brought forward on Monday, January 4th.

———————————
Battlefords RCMP are seeking the public’s help in identifying the suspect of a theft.

Police were called to a scene where a lone female had left a business on Railway Avenue East in North Battleford with a number of items she did not pay for. When staff had confronted her, she revealed an edged weapon. The incident occurred shortly after 8pm on December 29th and an image of the suspect was captured on surveillance.
If you have any information regarding this crime, contact North Battleford RCMP at 306-446-1720 or Crime Stoppers at 1-800-222-TIPS (8477).
Facebook
Twitter
ReddIt
WhatsApp
Email
- Advertisment -
- Advertisment -
- Advertisement -