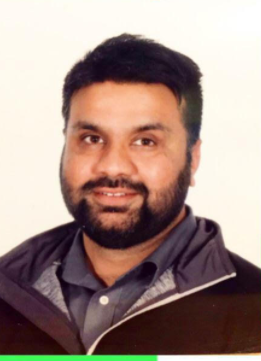 Aftab Arif has thrown his name in for this year's municipal election. [Aftab Arif/Supplied]

This year’s municipal election has drawn in a new resident of the Lloydminster community into the race as well.

Local property manager Aftab Arif moved to Lloydminster from Saskatoon, before that living in Toronto, where he studied international development at the University of Toronto. He moved to Lloydminster this year because he was interested in seeing the western part of the country, was excited to live small-town life and set a goal of perhaps building a farm in the area.

Arif says he wants to bring what he’s learned helping residents and families find homes into the large scale of the city, and also work to make sure money is being utilized in taxpayers favour, especially as the economy recovers from things like the COVID-19 pandemic.

“I want to make sure that as long as there are challenges in the community, that we ensure we give breaks to taxpayers wherever possible, and try to look towards other avenues to generate that surplus in the budget available to us, and have the infrastructure and other services in the city continue to a provide a well-funded service to the city.”

He explains that he would also look to negotiate better deals when it comes to work contracts, spending time searching around different vendors to find not only the most consistent work but also at a more cost-effective price for taxpayers.

Arif adds that he would look to foster more business growth in the community, which in turn could provide more steady jobs for residents both entering the job market or established.

“Small businesses are the backbone of any economy, and that’s no exception for Lloydminster. So if we are supporting our small businesses, bringing in more small businesses to the town, that is going to generate more jobs for our young generation in the city, as well as anybody who is sort of looking for work or employment.”

In terms of social needs, Arif says mental health supports and addiction services are a need in the community. He says, if elected, he would work with community partners to provide not only these recovery and mental health services but also career counselling to help people find a path where they need it.

“I want to work with the City Mayor, and if I am elected as a councillor, with the other councillors to ensure there is a project at Lakeland College where we can provide counselling services for our people [and] our younger generation, who are lacking a roadmap for their life, so to speak.”

He notes that he would also like to see the Lloydminster Hospital be able to provide more services quicker, for example, with things like more laboratory services and more in house testing. He says that this not only serves the city residents but also people from places like the Onion Lake Cree Nation or Frog Lake, who utilize Lloydminster Health Care Services.

“It’s all the more reason to spend more resources on that and work with the provincial governments in both provinces, in Alberta and Saskatchewan. This gives Lloydminster unique opportunities with unique challenges for being a bi-provincial status for the city, to make sure that both provinces and the federal government are supporting us on a local level.”

Voters go to the polls on November 9th. Arif, along with the other seventeen council candidates, will be a part of a virtual town hall forum on October 19th.