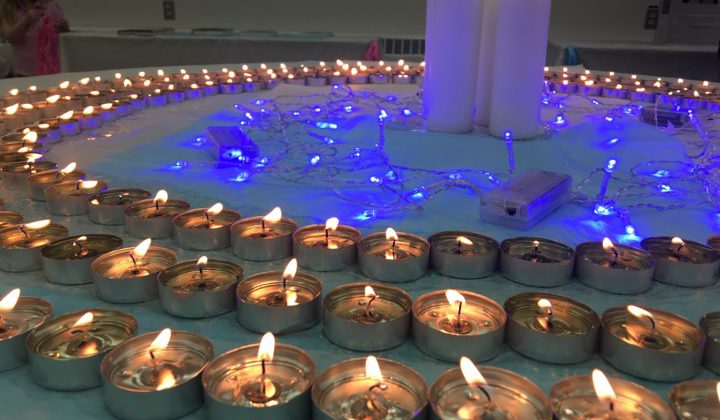 The vigil held at Lakeland College during the Transgender Day of Remembrance. (Kalie Macintosh/ 106.1 The Goat.)

Lloydminster residents are invited to an online vigil to remember the transgender lives lost to prejudice, violence and suicide.

Organizers Stirling Moess and Jenson Brown will host the virtual Transgender Day of Remembrance vigil, a moment of silence and the following question and answer discussion on November 20th at 7 p.m. A livestream of the vigil will be featured on the LGBTQ+ Society of Lloydminster’s Facebook page and Moess says they will also be posting more videos and information earlier in the day ahead of the event.

This is the third year the society has observed the day of remembrance. Moess says it’s important for them to continue to show support for the community members even through the turbulent times of the pandemic.

“It’s more of a memorial type thing so it’s not as necessary to be in-person per say. It’s just taking a moment to remember those [we’ve lost] and get the community together in some way, shape or form.”

“We want to make sure that the community knows that we are thinking about the trans community here in the city and the surrounding area.”

Moess believes the group has made progress in making Lloydminster a safer place for members of the LGBTQ+ community.

“In that sense, I think it’s doing what it’s supposed to do which is to let other trans people know that there are people in the community that care and you don’t have to be alone.”

The day of remembrance was started by transgender advocate Gwendolyn Ann Smith in 1999 in memory of Rita Hester, a transgender woman who was killed in 1998.