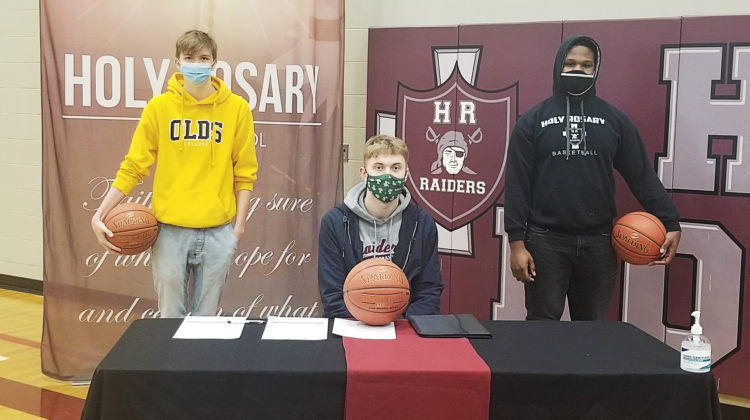 Three Holy Rosary Raiders boys basketball players are taking the next step in the student-athlete careers.

Grade 12 students Jonathan Barnett and Justin MacDonald are signing up to play with the Olds Broncos following their graduation while Benjamin Rose is headed to the University of Saskatchewan to play with the Huskies.

Raiders forward Rose is going into Education at the U of S in hopes of becoming a teacher and coach in the future.

“In the past five years, Kuypers has sat me down and talked with me about the potential I have and what I can achieve if I put my mind to it.”

“It’s a great opportunity. It’s close to home. I can develop there and I can enjoy the next step in my career.”

He says staff from the U of S always stayed connected with him and his parents as they planned their decision and hopes he can contribute to the team early.

Forward Barnett will be going into the Business Management field at Olds with a focus on sports management. He says he’s excited to play with the team and just attend college in general.

“I want to experience it as it is. Most of my family didn’t go to college. There are one or two of my family members who were in college or university so it’s a big responsibility, especially since I’m the oldest. I set the whole path for my siblings and can teach and prepare them for what they will come into.”

Barnett says he’s excited to share the experience with a fellow teammate and friend. McDonald adds he and Barnett have been friends since Grade 8 and have always held similar interests. MacDonald, who plays combo guard for the Raiders, will also be taking Business and Sports Management at Olds College. He says one of the aspect that drew him to Olds was the welcoming feeling from the team.

“Basketball has been a part of my life for a long time and to take it into post-secondary is pretty unbelievable.”

MacDonald adds another draw was the chance to be a part of their team rebuild.

“They’re rebuilding a whole new team. The coach is new and it’s a good opportunity to go in and show what we can do and get a good spot on the team. [We] can help build the future of that team.”

The Raiders had their last season cut short and the playoffs were cancelled the day before it was scheduled to start. A decision on the 2020-2021 season hasn’t been made yet, but the players are hopeful. All three believe they have a strong team this year and want to play in their final year of high school basketball.

“It hurts because we definitely could have become provincial champions. We had a very tough team. If it’s possible we get a season this year, I think we can make that happen again,” says Barnett.

Head Coach Luke Kuypers says seeing players who started their first year in the program the same time he did was a special moment.

“It’s pretty amazing. A couple of years ago we didn’t have that many kids at all in a serious basketball program. It’s really developed and shows the hard work they’ve put in and their commitment to getting better on and off the court. It’s really special to see that they’re not just great basketball players, but they’re great kids that put in hard work and it’s paying off.”

Kuypers is glad to see Barnett and MacDonald stick together and keep up the family spirit which was an important aspect to his coaching. He adds he will be keeping an eye on all of the players’ progress once they join their new teams.