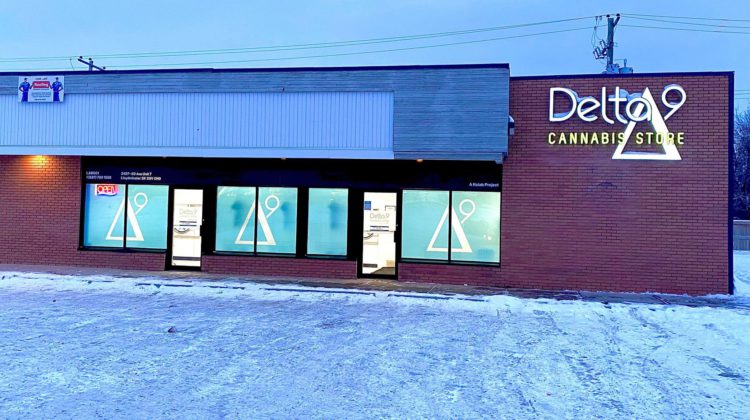 Delta 9 has made its first mark on the Saskatchewan cannabis market by opening a shop in Lloydminster. [Dan Soul/106.1 The Goat]

A cannabis company is hoping to make a successful first venture into the Saskatchewan market, using Lloydminster as a place to start.

Winnipeg based Delta 9 Cannabis has recently expanded into Saskatchewan for the first time, buying up the former location of the Lab-001 store at 3427-50 Avenue. This store adds to Delta 9’s existing locations, five of which are in Manitoba and the other two in Alberta.

Delta 9 CEO John Arbuthnot says they decided to make the move into Saskatchewan because government regulations make it easier for retailers to buy cannabis products directly from manufactures instead of through a governing board like the Alberta Gaming, Liquor and Cannabis agency (AGLC), for example. It also unites their markets in the two provinces they already exist in.

He notes these easier restrictions, and the small number of cannabis shops on the Saskatchewan side of the city, provides a competitive landscape for retailers pricing, which he hopes will allow Delta 9 to have prices that will even undercut the illegal market.

“We’ve heard since legalization complaints around high pricing and things like that, and as markets mature, I think there’s an opportunity for us to really directly compete with that black market. It’s not uncommon in a Delta 9 store to come in and see products for, say, $4 a gram. So, [we’re] really undercutting that black market component and I think starting to pull in some consumers who were perhaps sticking to the illicit market.”

Arbuthnot adds they’ve previously done business with Auxly Cannabis Group Inc. and Kolab Project, the previous owner of Lab-001, and the deal worked out as those companies want to get into more the manufacturing side of cannabis products, while Delta 9 wants to move into retail.

In the meantime, Delta 9 has rebranded Lab-001 under their flagship name, revamped the inside of the store and updating logos. Along with that,  Delta 9 has also done work frosting the glass windows and making it quite clear that it is in fact now a cannabis shop, and not a laundromat, which they say some customers were previously confused by as the store previously still had all the machines in front.

In the end, Arbuthnot explains, they want the location to serve as a place where trained staff can help cannabis users of all stripes can make informed choices about the products they choose to consume.

“We really look to emphasize education, whether you’re a seasoned consumer or a first-time consumer coming in just looking for information, that we’re giving you that wealth of info around cannabis products and to make sure you’re having a good experience, no matter what you product format selection might be.”

The company also believes Lloydminster is a good fit for them, despite there being several cannabis stores in town already, because they’ve had success in similar markets like Brandon, Manitoba, which is close to Lloydminster in terms of population and the number of stores compared to it.