The Wainwright & District Chamber of Commerce is advising people to be on the lookout as some fake 50 and 100 dollar bills have been found in the area.

In information posted online, the chamber says the phoney bills are believed to have been purchased on the website Wish.com, and with slight alterations is being used to buy goods. While Wish.com does have all fake versions of all Canadian bills for sale,  the Chamber has only been made aware of the 50s and 100s being used.

If someone’s trying to verify that a Canadian bill is real, the Wainwright Chamber of Commerce says things to look for are serial numbers on the back, that the bill is printed on plastic-like material and not paper. Black checkered lines should not be in the corner of a real bill, and it should have see-through material on the maple leaf and the strip beside the portrait. People should also watch for blue marks or scrapping where Asian letters and characters used to be.

They also recommend consumers and businesses protect themselves by either not accepting $100 bills or having a second staff member come to verify the authenticity of the bill, whether that be a manager or another employee. The chamber says having these deterrents in place can make it less likely for someone to try and pass a fake bill.

People are also urged to call police immediately if they believe a fake bill is trying to be passed off, so that the suspect may possibly be apprehended while still at the location. 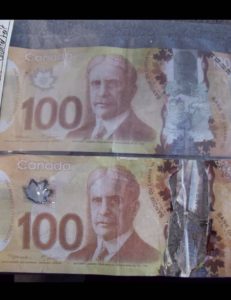