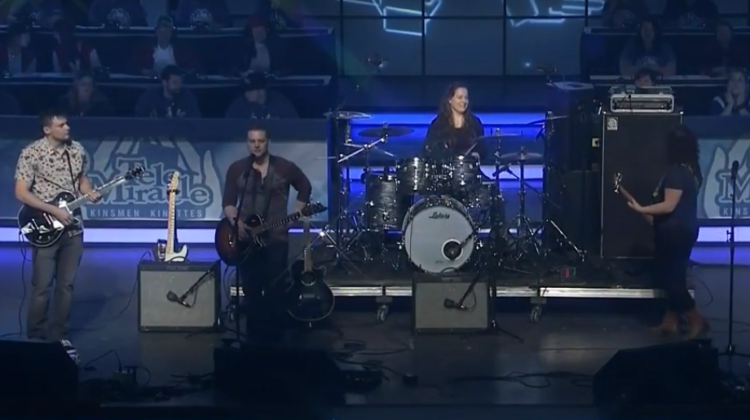 Two Lloydminster groups have been chosen to perform at TeleMiracle 45.

This years altered 20-hour telethon will feature over 75 performance groups from dance to bands to solo performers based all across Saskatchewan. Local band Hillside Alliance and a dance performance from Core Dynamics Pilates and Dance will be spotlighted in the main show which is being shown on CTV and livestreamed on the Telemiracle website.

TeleMiracle has a new format for the year. In order to stay within public health guidelines, there will be no live audience at Prairieland Park in Saskatoon, all performances will be pre recorded with all cameos and guest stars also showing up remotely.

Angela Ecker, drummer for Hillside Alliance, has performed on the show multiple times over the years and says this years will be slightly different, but no less important.

“It’s different from the regular way we’re used to having TeleMiracle come across to us. I don’t think it’s going to be less good quality wise or anything like that. I’m excited for what’s going to happen and hopefully we can still raise a good amount of money.”

She says they’ve also tried something different with this years performance and will be covering Stone Sour’s Through Glass.

“We’re thinking of doing more of an acoustic setting,” Ecker says. “It’s a song we stumbled upon and thought had a not bad message and was something a little different than what we gravitate towards for a TeleMiracle song.”

Also during the show, Core Dynamics will be showing off their tap skills in a performance based off of The Greatest Showman. Core Dynamics owner Patti Johnston says the children were able to get back in the studio in August after their earlier season was cut short in March. Staff were looking for different dance opportunities and found the call for TeleMiracle auditions.

“It was great getting back in the classroom and working on some numbers again.”

Johnston says being a part of TeleMiracle exemplifies some of the lessons taught in their program.

“We have studio core values that we try to live by every day and teach our kids; being of service to others and being ambassadors of the performing arts in our community. As a community, with so much going on right now and there being a lot of negativity, it’s a positive way for them to get a workout, but also spread that out.”

She says the children have been planning different ways to help raise donations ahead of the event and those ideas will be shown on their Facebook page. Ecker says they will also be fundraising ahead of time with more information being presented on their social media channels. She encourages everyone to watch the show and donate if they can.

“It’s a community so to speak, everyone is truly important.”

With all the new changes, TeleMiracle 45 Chair Brian Angstadt says the new audition process allowed for more creativity from performers as well as giving some of them who aren’t usually able to attend a physical audition a chance to be featured on the show.

“TeleMiracle is Saskatchewan’s charity. Seeing the Sask talent on the show is what TeleMiracle is made of and seeing people from all the different communities really hits home to the people watching the broadcast because they might recognize that person. They might see a familiar face.”

Angstadt says every dollar raised during TeleMiracle will stay in Saskatchewan and help provide specialized medical and mobility equipment to residents across the province. The foundation also provides travel assistance for those needing medical treatment in other towns or cities. Angstadt adds they have seen an increased demand for assistance in 2020. Last year, Telemiracle raised $5.5 million for the Kinsmen Foundation.

“It’s going to be a show we’ve never had before. There are a lot of new things that we’re trying and it’s going to be pretty cool to see what we’ve come up with.”

A countdown show is scheduled to begin on February 27th at 6:15 p.m. and the main show starts at 9 p.m. Donations can be made on the TeleMiracle website.