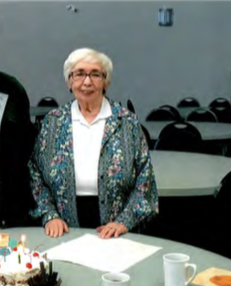 UPDATE 2: Lloydminster RCMP says there is no indication that any criminality to her death and no further updates are anticipated.

UPDATE: According to information made public by Grace United Church, Elizabeth “Betty-Ann” Davidson has been found, and has passed away.

The post, on behalf of Reverend Cathy Kinsman, expressed condolences for the family. It also says funeral arrangements will be announced at a later date.

Davidson was last seen on January 1st near 55 Avenue and 49 Street, and police say there is a concern for her well being.

She is described as 4’11 and 160 pounds. She has grey hair and brown eyes, and was last seen wearing a red ¾ length jacket, white sweater, black pants, and a red and white toque.

She also has physical limitations on her ability to walk. They ask residents to check their backyards, neighbourhood and parks in their area for any signs of Davidson.

The Lloydminster Rescue Squad is also helping with the search, and in a post online is calling on people to check in their immediate areas, in vehicles or in their outbuildings and properties.

If anyone has seen Davidson or knows where she is, they’re told to contact the Lloydminster RCMP, their local detachment or to remain anonymous, CrimeStoppers.

Update 10:30AM: This article has been updated to reflect comment from the Lloydminster Rescue Squad.