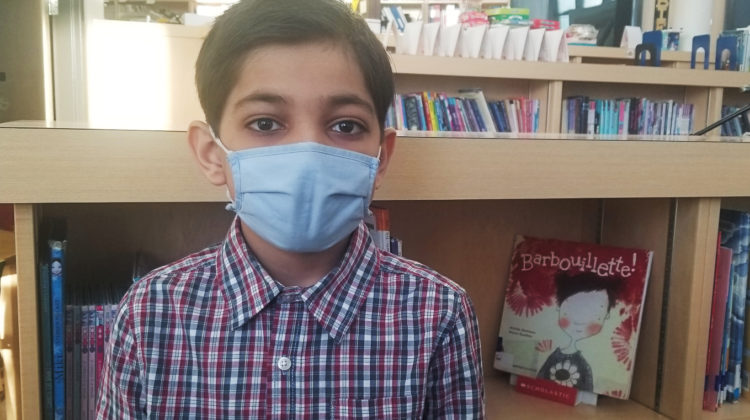 Hashim Shehzad only knew two to three French words before coming to St. Thomas Elementary but was determined to get back to his regular grade level classes as soon as possible.

The grade 5 student was integrated into the schools grade 3 French Immersion class with very little knowledge of the language  but was able to quickly get back into his grade level after putting in a ton of work at school and at home.

“I started off with easy words like ‘bonjour’ and ‘comment ca va’ then I started reading books and tried to understand [them]. I would use Google translate and memorize those words and keep them in my mind and use them.”

On top of the school work, Shehzad also started to watch movies in French while at home as well as listen to conversations to help his vocabulary.

His mother Noreen Khurram says Shehzad is always full of energy at home and spends his time playing ball hockey, soccer, video games and studying on his own. She and her husband were looking for a new way to challenge him when they inquired about joining the school’s French Immersion program.

In addition to French and English, the multilingual child is able to speak Urdu as well as read Arabic script. Khurram says her son is a quick learning and his excitement and self-control helped him reach his goal.

“He was so excited to go to a higher grade and he was asking the teachers all the time to give him extra work.”

“He grabbed a booklet that the teacher who asked him to complete in maybe a month and he completed it on the same day. He went back to the teacher and gave the booklet the next day, so he has so much energy. I don’t know how it comes up in him, but he wants to finish his tasks on time and quickly and he learns things very fast.”

Vice-principal Chantale Salt says the school usually doesn’t allow for a late addition to their immersion programs as it can create difficulties for the student if they aren’t motivated as well as adds extra responsibilities on teachers. However, she says everyone involved was willing to put in the work to get Shehzad up to speed in the classroom.

“Without that support system you don’t get where you need to go and he being so self-motivated really helped him progress through that many levels of French as quickly as he did.”

“The family was very motivated and devoted to making sure that they put in the extra work. Typically, Hashim coming into grade 3 he would need some tutors and spend extra time with exposure to the French language.”

She says they also pulled Shehzad out of his English Language Arts classes to allow for more time focusing on French and complete two years of learning in around a year and a half. Salt adds he already advanced for enough in his English skills that it wasn’t detrimental.

His favourite word is ‘but’ which means goal which is fitting as Shehzad has big dreams of wanting to help people in the future.

“It’s the second language in Canada and I thought it was important to learn. If you want to be the [prime minister] you have to know French and English.”