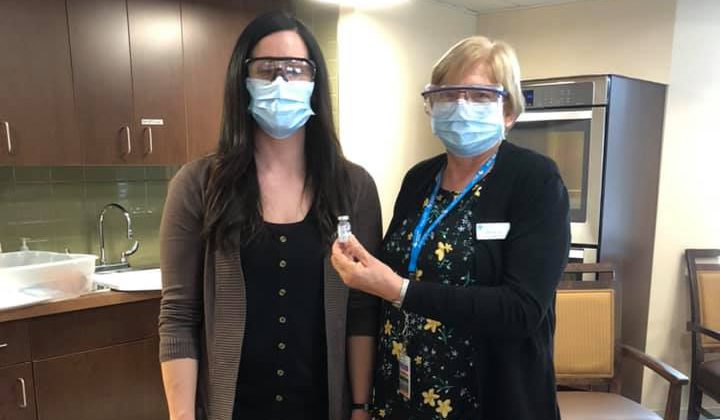 COVID-19 vaccines arrived at the Pioneer House and residents and staff were inoculated. (Pioneer Lodge and House, Facebook)

Healthcare workers and long-term care residents in Lloydminster will soon be getting COVID-19 vaccines shots.

The Saskatchewan Health Authority announced 975 doses of Pfizer vaccine were sent to North Battleford over the weekend. Clinics for priority health care workers were scheduled to begin on January 18 while long-term care residents and staff in the Lloydminster, North Battleford and Wilkie areas will receive their shots the next day.

Residents of Pioneer House were able get the vaccine a few days earlier as it is an Alberta Health Services supported facility and will follow the Alberta vaccine rollout plan. Administrator Joyce Bell says residents were in good spirits, but it was the staff who were most excited about receiving the vaccines.

“It’s been the staff who have been looking after these people and trying to keep them safe and give them a healthy quality of life. Now to have this one step to further unlock doors and have family back and have that quality of life safely again, it truly was the excitement in the staff of having it done that was truly evident.”

She adds a majority of staff travelled to St. Paul or Wainwright to receive their vaccinations earlier and they are still waiting on a date for clinics for the residents in the Lodge. Despite that, Bell says there is a renewed sense of optimism in the facility.

“This is the light at the end of the tunnel. This is the way a majority of our team is looking at it. We just have to keep things tight until such time and a few weeks after that second shot people should be able to start living again.”

As of January 18, Saskatchewan has administered 22,618 doses of the vaccine using a priority sequence of health-care workers, long-term care residents and elderly populations in the Far North region and remote parts of the province. Vaccine manufacturer Pfizer announced production of the vaccine will be impacted for a few weeks due to work on its facility expansion. The company is reducing deliveries to all countries.