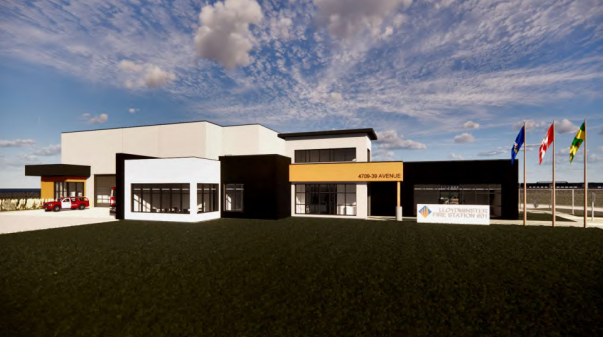 A rendering of the new Firehall #1. (City of Lloydminster)

The cost for the new fire hall is estimated to be $1 million less than originally budgeted, but city administration says that can change very quickly.

City council was presented with the cost of work on the Fire Hall #1 replacement which puts it at just over $7.1 million. The city has budgeted $8.5 million for the project.

Senior Capital Infrastructure Manager James Rogers says costs can still go up on the project as they still need to secure materials and services which could come in higher than expected. It was noted that the cost of construction materials like steel has skyrocket during the pandemic which could push the actual cost up to near the budgeted amount.

Mayor Gerald Aalbers says time is of the essence on this project in order to keep costs low.

“We’ll be working with our construction manager to be able to procure what we need at a reasonable and fair price.”

“Talking to various people in the construction and business industries, supply in residential and commercial is challenging so the work will be cut out for our team but I know they’ll rise up to it.”

Council accepted the cost of work report and authorized the project team, lead by Chandos Construction, to move forward with tender packages on the project. Rogers says they expect to have them out as soon as possible with some published as early as next week.

In 2019, the current Fire Hall #1 was deemed near end of life and a replacement was needed. The original was built in the 1940’s and was last renovated in 1992. The new building will be built on the city-owned property at 3752-47 Street. The city is pushing to have the new building ready for move in and in operation by December 2021.