50 St. water and sewer main work expected to start in May 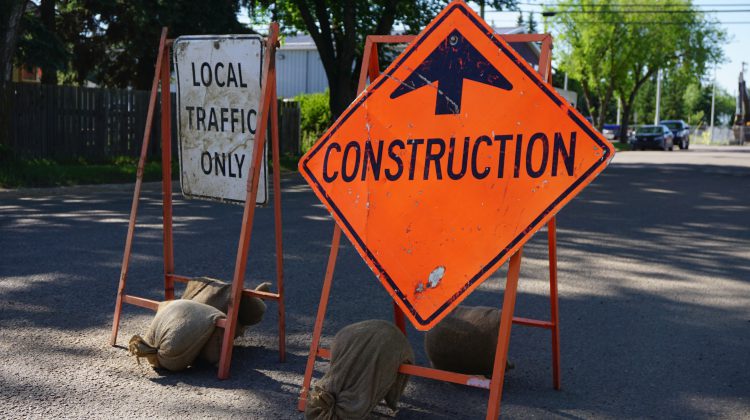 Signs announcing construction and calling for a restriction to local traffic only - Lloydminster neighbourhood. [Photo: 106.1 The Goat]

The city is hoping for an early start to the construction season as council approves the contract for this year’s water and sewer line replacements.

Rusway Construction will be continuing to replace the cast iron mains on 50th Street between 52 and 54 Avenue which were originally installed in the 1950s. Work expected to start in May and run until September 3 depending on the weather. In 2020, Rusway replaced the 50th Street mains from 51 to 52 Avenue and replaced the curbs and gutters and laid a new asphalt surface on the road.

Mayor Gerald Aalbers says residents in the area will have to utilize the back alleys more as construction moves into the more residential areas.

The cost of the project came in significantly under-budget as the city allocated $2.9 million and Rusway put up a $1.8 million bid. The city also put aside a $270,000 contingency for the project leaving just over $710,000 in the budget. City administration proposed putting that money towards another project for the year as a seperate program which will go out for tender sometime in the near future.

“Sometimes projects do come in under-budget from what was expected like we see this year. We have had some other issues come up and we’ll be able to address a failed sewer line in the near future and that money will be coming out of the budget instead of reserves.”

In the council meeting, Aalbers encouraged administration to take advantage of the Municipal Sustainability Initiative (MSI) grants as much as they can as Alberta announced funding to those grants will be dropping in the future. The Alberta budget showed $1.2 billion in MSI funding for 2021-22 and then it decreasing to $485 million in 2022-23 and 2023-24. The City of Lloydminster will receive approximately $5.5 million from MSI in 2021.

The province is frontloading the funding as a way to help cities in their economic recovery from COVID-19 by starting new infrastructure projects.

“Every city and municipality uses it and it will certainly be challenging going forward. We’ll see an increase this year and then a decrease the following two years. We’re going to have to do some adjustments to budgets going forward to try and deal with what we have.”

Aalbers says construction this season will be noticeable especially on Highway 16 which will be see some significant rehabilitation. The city’s engineering department is also finalizing plans on the 2021 Street Improvement Program.