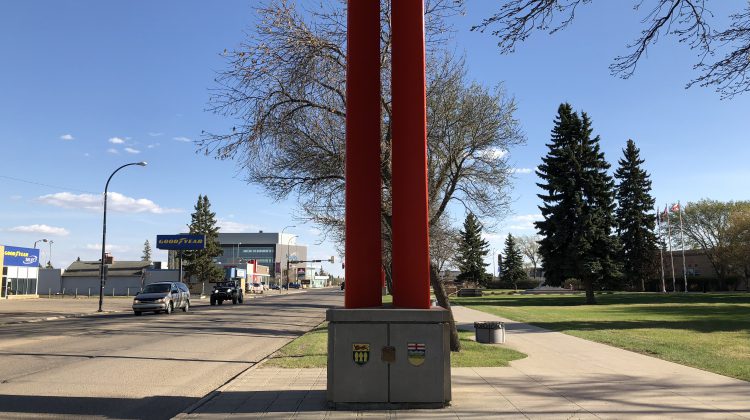 A pillar marking the provincial border in Lloydminster. (Photo: 106.1 The Goat/Ezzah Bashir)

Lloydminster was one of four Saskatchewan cities included in a list looking at the most livable places in Canada.

Ratesdotca created the Livability Report which factors in traditional metrics such as affordability and growth along with lifestyle criteria like scenery, nightlife and accessibility to rank the most livable community in the country. Lloydminster made the list at the 156 spot while Saskatoon was the highest ranked Saskatchewan city placing at number 66. Regina was 77th and Moose Jaw was 79th. Lloydminster was a few spots ahead of nearby communities Cold Lake and Bonnyville which ranked at 163 and 165 respectively.

The Canadian insurance company says, due to the ongoing pandemic, many Canadians are considering moving. A Leger survey done on their behalf listed 23 per cent of the 1,514 respondents wanted to move since April 2020 and 21 per cent were looking to move from a major city to smaller rural areas.

The report described Lloydminster as a “friendly petroleum and agriculture based city on the AB/SK border” and scored the city favourable for the housing costs which averaged out at $274,000 and the $54,000 minimum income required for a 20 per cent down. However, in the lifestyle metrics Lloydminster was given one star across the board. One factor that played into the scenery criteria was the approximate distance to lakes and mountains.

Langford, B.C., Kelowna, B.C. and Trois-Rivières, QC were the top three most livable places in Canada. A total of 166 communities were included on the list.