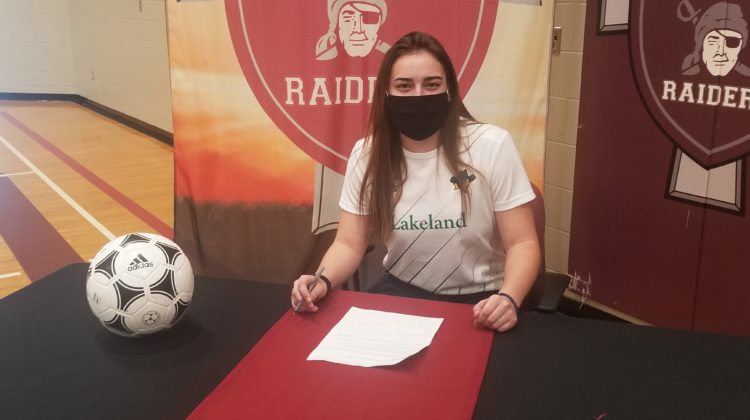 Haylee Rogers will be playing with the Lakeland Rustlers soccer team next fall. (Nikita Ganovicheff, mylloydminsternow.com)

Haylee Rogers will be seeing a lot of familiar faces as she moves forward with her soccer career.

Rogers signed to play with Lakeland College’s Women’s Soccer team as a centre back or holding midfielder when she graduates from Holy Rosary High School this year. She says she’s played a lot of sports since she was young and soccer was the one that stuck as she enjoys the pace of the game and running around the field. The dedication to the sport has led her to some unique experiences such as playing with the Lakeland team before the pandemic and travelling to different countries.

“I played in Spain at an international tournament which was so amazing. I played in Las Vegas once and I was supposed to go back but COVID happened. They were both amazing experiences and I was so excited to be a part of that.”

She says she received offers from schools in Brandon, Manitoba, the United States and even an opportunity in England, but she didn’t want to move too far from home when she decided her next step.

“I chose Lakeland because it’s close to my family and I didn’t want to move too far away too quickly. Also, I like the financial [aspects], staying at home and I like the campus a lot too.”

Rogers is never too far away from the pitch either as she helps coach younger Lloydminster soccer players. She says it’s exciting to see the sport gaining popularity with young girls in the city. Holy Rosary Raiders soccer head coach Alison adds they are seeing a similar rise in interest in the sport as well.

“We had quite a number of younger players last year so over the next few years we’ll be sad to lose some of our star players like Haylee but we’re looking forward to training and developing some of new players and developing a stronger [soccer] program here at Holy Rosary.”

Bonsan congratulates Rogers on her signing and calls her a natural leader. Rogers will be in the University Transfer program at Lakeland and hopes to get into a medical program at another university in the future and adds she will also be looking into their soccer teams at that time as well.