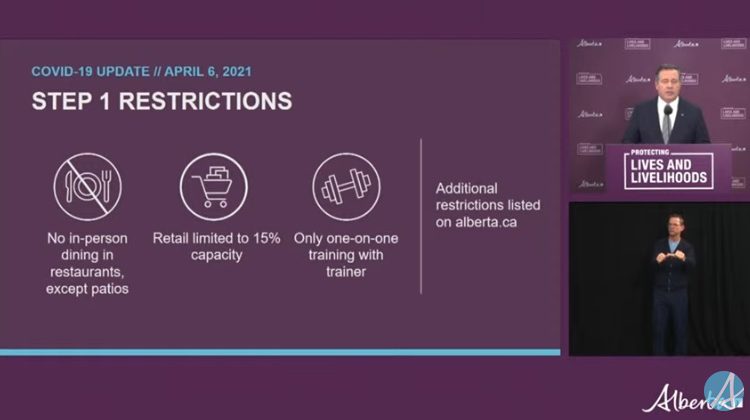 Premier Jason Kenney has announced Alberta will return to Step 1 of the four step Path Forward.

Alberta is reverting back to Step 1 of its four step path forward thanks to spiking cases of COVID-19.

Premier Jason Kenney delivered the news Tuesday afternoon, saying it’s not an easy announcement to make but the third wave is here and variants are winning.

He says the surge of variants has picked up the pace in recent weeks, going from about 100 per day only three weeks ago to 676 as of Tuesday.

The Premier also pointed to a recent case of a traveler returning from BC who tested positive for the P.1 variant. That one case led to 35 cases, one death and two ICU admissions.

Kenney notes if the current trend continues, there will be 2,000 new daily COVID cases by the end of the month and up to 1,000 people in hospital.

He says if we don’t slow down this curve, we are set to hit maximum cacpacity in our system by mid-may and challenge the health of thousands of Albertans.

Because of that, Kenney says the COVID Cabinet Committee has decided to take strong steps to slow the spike and start bending the curve with stricter retail capacity limits, no in-person dining at restaurants and a return to only one-on-one fitness training.

More details on what a return to Step 1 entails, can be found on the Government of Alberta website.