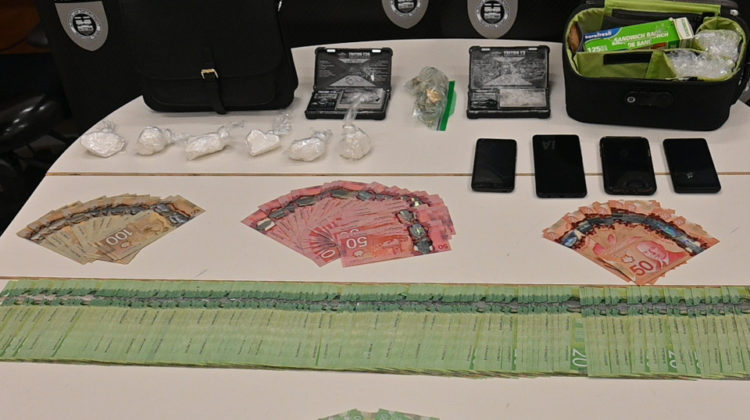 A photo of items seized during the search. [Supplied by ALERT Lloydminster to MyLloydminsterNow.]

Two people have been arrested in connection to a drug investigation by ALERT Lloydminster.

The ALERT organized crime and gang team made the arrests and drug seizure on September 1st. The Lloydminster RCMP also assisted by executing a search warrant at a home, where ALERT says the majority of the drugs were seized.

During this arrest, ALERT says they allegedly seized 173 grams of cocaine, 17 grams of psilocybin mushrooms, and $7,340 in cash. ALERT is also accusing the two suspects of being actively drug trafficking in the Lloydminster area, as well as in other parts of Saskatchewan.

Superintendent Dwayne Lakusta, the ALERT CEO, noted in a statement that ALERT brings specialized tools and resources to Lloydminster, and they will continue to conduct targeted investigations related to drug trafficking, gangs and firearms offences, as Lloydminster is a “transitory route for drug smuggling between provinces.”

ALERT expanded to Lloydminster in November 2020, and serves areas around the Lakeland region. Anyone with information or suspecting drug or gang activity is encouraged by ALERT to contact their local police or CrimeStoppers.

Correction: a previous version of this article’s headline stated that theft charges were laid. They were drug charges. We apologize for the error.