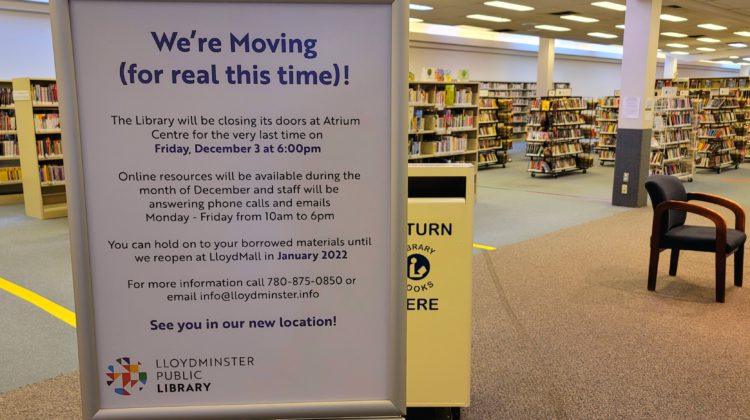 The Lloydminster Public Library will make a second attempt to move it’s operations to the LloydMall as its old location will close at the Atrium Centre on Friday December 3rd at 6 p.m.

The reopening is slated for early next year at the new location according to the City, but will depend on the timely completion of the move.

Interim Library Director Michele Duczek says to hold on to borrowed materials until the Library reopens at the Mall.

“We are going to extend loan periods so that nothing will be due in December. So you can just wait until we reopen. If you must return stuff you can return it to the exterior book drop at Atrium Centre, as long as that is still operational or you can come downstairs because we will be here for part of December.”

Duczek says as they prepare for the move, staff will still be answering phones and emails, but they will not be open to the public.

The City indicates that digital and telephone access to the Library will be unavailable for approximately one week, beginning Saturday, December 13 as the supporting infrastructure is reinstated.

The Library has been serving the region since 1929 and Duczek is hopeful as they once again try to move across town.

“As long as things are working smoothly at the Mall, the electronic stuff will be accessible and if you have any issues with it, you just have to give us a call.”

The Library was in the midst of its first move when it had to return to the Atrium Centre in early September following a flood at the LloydMall in mid-August.

Residents are encouraged to continue to use the digital Hoopla and Overdrive libraries during the move. Products available include ebooks, audiobooks, digital magazines, newspapers and online language learning.